Posted By theboss on 3rd February 2016 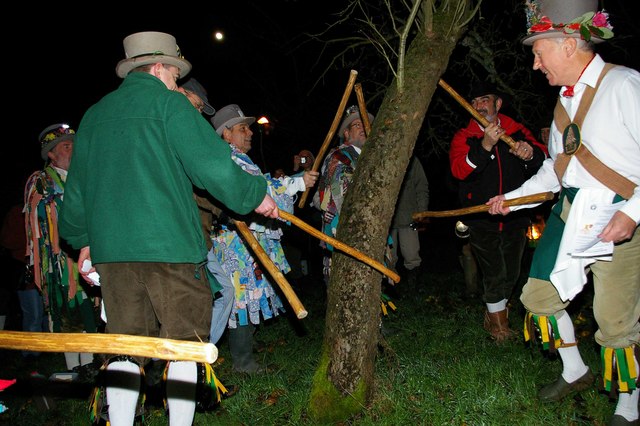 A tough decision to make last weekend – whether to join village friends at the local cider farm for the annual Wassail, or stay in and watch the latest Mad Max movie.
Wassailing is the traditional Mid-winter booze-up much beloved of rural communities, even if no-one can really remember what it’s all about. The undisputed facts are that it involves a bit of dressing up, a “blessing” of the apple trees and the drinking of much cider.
Some Wassails involve Morris Dancing, some involve singing, some involve pouring cider onto the roots of a newly-planted tree, and many involve raising money for local charities – but all of them involve drinking.
I hear that they are very big on Wassailing in Bodmin. The Cornish Guardian seldom misses an opportunity to report on the mid-January activities of the Bodmin Wassailers, who dress in Victorian clothing and tell anyone who will listen that they are celebrating a tradition started by the town clerk in 1624.

In Bodmin they do it “for the continuance of love and neighbourly meeting.” There is no mention of cider, specifically – perhaps in Bodmin, any booze will do. It goes without saying that the 1624 Bodmin town clerk was no Victorian, so already you can see that there is some disconnect between what people are actually doing and what they think they are doing.
It seems that you can have different kinds of Wassailing, depending on where you are. In some parts of Cornwall it might be about banqueting, in other parts it might be about calling on people and serenading them at their home, as if they hadn’t had enough of that with the Christmas carol singers the previous month. In and around St Mabyn, it’s about cider, perhaps with some historical derivation from the days when agricultural workers might receive some of their pay in alcohol.
In Padstow, of course, hardly a week goes by without some kind of festival. The Big One is ‘Obby ‘Oss, on 1st May, when the pubs stay open all day and anyone still sober by 11am is a wimp. I wonder how many of the 30,000 people who attend ‘Obby ‘Oss have any idea, or even interest, in the rural history they think they are celebrating.
It is hard to escape the thought that, in the 21st century, these traditional customs and festivals have become just another marketing opportunity. Once you start looking into the pagan origins of many of these things, you might wonder how they still survive. Cornwall’s rural primary schools are already preparing their children for Maypole Dancing, presumably unaware that this was originally a fertility ritual. The huge, erect pole around which the youngsters are skipping represents something that I dare not describe in a family newspaper.
Rural Cornwall is not the only place where we go in for such daftness – but at least we don’t have asparagus festivals, or knob throwing competitions (the “knob” is a Dorset biscuit) and nor do we incur the wrath of the Health and Safety Executive by chasing balls of cheese down a steep, grassy hill.
One thing which all of these rural festivals have in common is that they date from an era before television or internet.
I’m afraid that I embraced the latest Mid-winter festival, the “Dry January” holiday granted to my liver, and stayed in to watch Mad Max.