Cornwall prepares to host the world’s most expensive, and dangerous, photo-opportunity as St Ives gets set to become G7 garrison town

It could take a few days for the news to sink in.  A major international summit is to be staged in Cornwall in only five months time.

The government’s attempts to manipulate news of the 11th-13th June summit came unstuck yesterday morning (Saturday) when some of the selected media accidentally published details.

The formal announcement was made at 10.30pm last night in order to make a splash in today’s Sunday newspapers.

The full government statement is published below.  What it does not say is what usually happens at G7 summits.

In recent weeks government officials have been approaching St Ives hoteliers and campsite owners and making block bookings, effective immediately, in order to implement the draconian security measures necessary for such events.

Cornwall’s residents can expect to see heavily armed police, and soldiers, patrolling the streets.  Sniffer dogs will explore anywhere and everywhere that might conceal explosives.  The G7 might have rescued Cornwall’s “visitor economy” for 2021 – but not in any way that local residents would recognise.

One of the topics for discussion is climate change, yet the event itself will contribute massively to carbon emissions.

Last year’s G7 summit had been due to be held at Camp David, USA, but was cancelled because of the Covid-19 pandemic.  The previous year, however, saw running battles between thousands of police and protestors at Biarritz, France.  More than 13,000 police were deployed, some using tear gas and water cannons to attack people they described as “rioters.”

The G7 summits have become a regular magnet for anti-capitalist protest.  In 2015 there was trouble at Bavaria, Germany and in 2010 at Toronto.

Devon and Cornwall police have no previous experience of dealing with similar events, and can be expected to call for support from other forces, and the military.

The Cornwall G7 will also be the first in the world to be staged during a major, life-threatening pandemic in which a highly infectious disease is spreading rapidly round the world.

G7 organisers are gambling that the Covid-19 virus will, by June, be under control – contrary to the advice of the government’s own scientists.  The rate of infection in Cornwall fell again, slightly, yesterday but the seven-day average is still 313 cases per 100,000 population.  The average for England is 561.9.  Nevertheless, for the first time, a G7 summit will have to include a Covid-19 risk assessment.

This is the official government statement:

The G7 – which is made up of the UK, Canada, France, Germany, Italy, Japan, the USA and the EU – is the only forum where leaders of the world’s most influential and open societies and advanced economies are brought together for close-knit discussions.  They will also be joined by the leaders of Australia, India and South Korea who will attend as guests.

The choice of Cornwall as the location for the summit will mean the eyes of the world are on the beautiful, historic and innovative region.  The leaders’ meeting itself will be held from 11-13 June at the Carbis Bay Estate, but additional locations across the whole of Cornwall will reap the benefits of hosting the G7. Contingencies are also in place to respond to public health advice and ensure the summit is Covid-safe.

International delegates will also be staying at the Tregenna Castle Resort and other locations in neighbouring St Ives and around Cornwall.

Cornwall Airport Newquay and the National Maritime Museum Cornwall in Falmouth will also play an official role in the summit with Falmouth hosting UK and international media.

Visit Cornwall estimates the total economic impact for the region will be £50million, including through an increase in future tourism. 20% of Cornwall’s jobs are already linked to the tourism industry.

The government will also work closely with Cornish leaders and institutions to ensure the Summit leaves a long term legacy for the region, reaping the benefits of hosting the G7 for years to come.

As a powerhouse for green innovation, Cornwall is an ideal location for global discussions on building back better from the coronavirus crisis. The Summit is an opportunity to show the crucial role that rural areas like Cornwall will play in the decarbonised, digitised world of tomorrow, complementing our major cities.

G7 countries already have strong ties to the region, including mining pioneers who migrated to the US in the 19th Century, innovative Japanese pottery in St Ives, and historic connections with Brittany in France.

The Prime Minister said: “As the most prominent grouping of democratic countries, the G7 has long been the catalyst for decisive international action to tackle the greatest challenges we face. From cancelling developing world debt to our universal condemnation of Russia’s annexation of Crimea, the world has looked to the G7 to apply our shared values and diplomatic might to create a more open and prosperous planet.

Above: (top) unedited footage from the 2019 G7 in France, the 2015 summit in Bavaria and (bottom) a 40-minute Canadian documentary made in 2010, telling us what to expect.  St Ives, normal resident population a little over 11,000, could be in for a shock 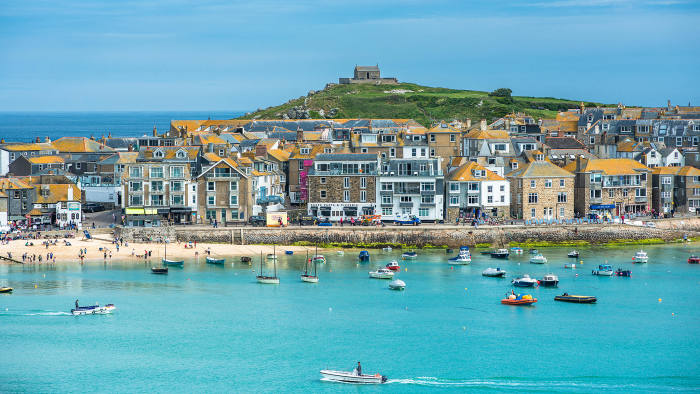 “Coronavirus is doubtless the most destructive force we have seen for generations and the greatest test of the modern world order we have experienced. It is only right that we approach the challenge of building back better by uniting with a spirit of openness to create a better future.

“Cornwall is the perfect location for such a crucial summit. Two hundred years ago Cornwall’s tin and copper mines were at the heart of the UK’s industrial revolution and this summer Cornwall will again be the nucleus of great global change and advancement. I’m very much looking forward to welcoming world leaders to this great region and country.”

Julian German, Leader of Cornwall Council said: “On behalf of the residents of Cornwall, I will be delighted to say “Welcome to Cornwall – Kernow a’gas dynnergh” to the world leaders taking part in the G7 Summit in June. I am so proud that Cornwall is being recognised on the world stage.

“Reaching out to others has always been Cornwall’s strength – both historically when we shared our mining expertise across the world and today, as pioneers of deep space communication at Goonhilly satellite earth station and developing the capability for horizontal satellite launch through Spaceport Cornwall.

“We are already renowned for our hospitality and over four and a half million visitors every year experience our unique culture, enjoy the breathtaking landscapes as well as the high quality artisan food and drink we are so proud of. We are keen that this summit showcases the Cornwall we all know and love and more importantly, leaves a lasting economic legacy that benefits every community.”

Malcolm Bell, Chief Executive of Visit Cornwall said: “Cornwall has been voted the best holiday region in the UK for 10 out of the last 11 years in the British Travel Award, but it is a hidden gem to so many potential visitors from outside the UK. The G7 Leaders’ summit will focus the world’s press and TV on this very special place and this exposure is promotion we could never buy.

“It will not only showcase the beauty of Cornwall but give us the opportunity to communicate our heritage, culture and the connections to each country which will help drive growth in international visitors over the next decade.”

Further details around plans for the summit will be announced in due course. The government is working closely with Cornwall Council, Devon and Cornwall Police, Members of Parliament and other local stakeholders to ensure the smooth running of the event.

Contingency planning is also under way depending on Covid-19 restrictions and the need for social distancing and international travel restrictions.