Boris Johnson lied to the Queen and should resign, says Cornwall For Europe

With Cornwall’s MPs pondering their return to Parliament tomorrow (Wednesday), Cornwall for Europe, the local group campaigning for the UK to remain in the EU, has welcomed the Supreme Court Ruling today.

The group’s spokeperson Charles Boney said: "This ruling makes it clear that Johnson lied to Parliament, and by implication, the Queen. We have been campaigning for over two years on the basis that he lied to the Cornish People when he launched the Brexit Campaign bus in Cornwall in 2016, stating that the NHS could have huge extra funding if we voted Leave.

“He continued to deceive the electorate when he launched the poster stating Turkey was to join the EU and millions of refugees could flock here.

Today 11 Judges have unanimously condemned him.  We continue to campaign with even greater vigour, we hold street stalls throughout Cornwall every week and we are organising coaches from all over Cornwall to the huge march in London on 19th October.”

Sue Winter, who helps organise street stalls added:  “Johnson should resign, along with Rees-Mogg, who led the group of Ministers who went to see the Queen at Balmoral with Johnson's message asking for Parliament to be shut down. The decision had not even been considered by Cabinet!” 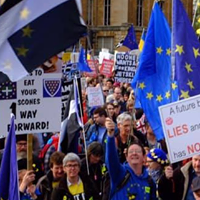 Cornwall's MPs have yet to react to the news that the extra five-week holiday they had been promised - immediately after the six-week Parliamentary summer recess - had come to a sudden end.

Boris Johnson has so far continued to strike a defiant note, telling the BBC he was determined that Britain would still leave the European Union on 31st October “come what may.”

Members of Parliament have been told to return to work at 11.30am tomorrow.