Cornwall Council declares war on climate change – but there are still questions about Truro New Town, stadium and spaceport

Decisions made in future by Cornwall Council will be assessed to see whether they comply with the council’s aims to tackle climate change.  It is not clear if this will include some controversial projects already underway, such as the proposed Truro Stadium – but it will include any proposed spaceport at Newquay.

In January the council declared a climate emergency and yesterday (Wednesday) its leading cabinet approved the first version of a Climate Change Action Plan.

This details some of the things that the council is already doing to tackle climate change and reduce carbon emissions as well as some new schemes and ideas for how the council can help address the climate emergency.

Among these are plans for a Forest for Cornwall which would aim to plant 8,000 hectares of trees across Cornwall.

The cabinet had earlier been questioned by Cornwall Green Party member Karen La Borde on its climate change plans  She was concerned that some of the money earmarked for fighting climate change was being taken from the council’s existing budget for renewable energy, and suggested that money which could be used for Spaceport Cornwall should instead be used to help make Cornwall carbon-neutral.

She did congratulate the council for the climate change action plan but warned that there was a risk of the council contradicting itself in promoting schemes such as the development of a new town at Langarth, Truro and the Stadium for Cornwall.

She said: “You are playing a game here with people’s lives. You need real change, not lip service.”

There are also plans to carry out whole home retrofitting which would aim to make homes more energy efficient.

At yesterday’s cabinet meeting there was unanimous support for the action plan from both cabinet members and among other councillors from all political parties.

There was also applause from environmental campaigners in the public gallery for some of the statements made by the councillors during the debate.

Edwina Hannaford, cabinet member for neighbourhoods and climate change, said that the action plan was only a starting point and that it would continue to be developed over time.

But she said that it was not just down to Cornwall Council and that everyone has a part to play in helping to tackle climate change.

The Liberal Democrat councillor said: “Cornwall should be playing a leading role in combating climate change.”

And she admitted that changing the council’s approach could mean that there will be some difficult decisions to be made for how the council goes forward in the future.

Cllr Hannaford said that some of the projects that had been included in the plan would not only provide benefits to tackle climate change but would help people in Cornwall as well. 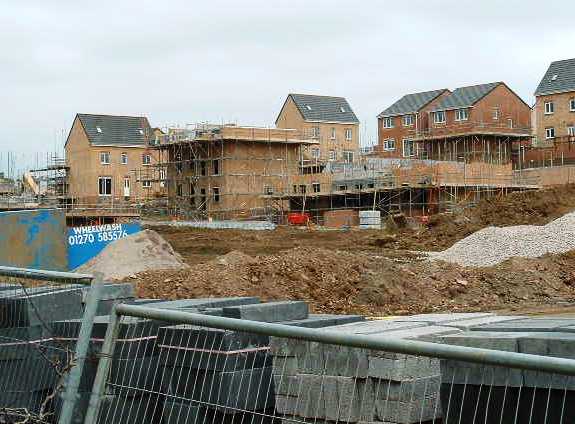 Cornwall Council's ambitious house-building programme, and plans for a spaceport at Newquay, will have to be assessed for their impact on climate change

She highlighted the retro fitting of homes to make them more efficient, saying: “Retro fitting homes may well save carbon but it is the lower heating bills that will help our residents.”

And she said that a low-carbon economy also has the potential to create new jobs and help the economy.

She added: “We will not always be perfect but we will ensure that climate change is a prioritisation and an integral part of our decision-making going forward.”

The cabinet member said that future reports on decisions to be made by the Cabinet would include details of their impact on climate change and said that this would be at the front of the report and not “buried”.

Labour councillor Jayne Kirkham asked whether the council would also revisit decisions that it had already made or was in the process of making to ensure that they fit with the climate change policy.

But council leader Julian German said that there was no plan to do that and warned that doing so could have “resource implications”.

The cabinet unanimously agreed to support the climate change action plan as well as providing funding towards some of the programmes.