Seven energy companies have announced their intention to bid for licences to exploit wind farms off the coast of Cornwall.

The Crown Estate says it has identified five “areas of search” in the Celtic Sea.  Part of the search is only a few miles north of the Isles of Scilly, although it seems unlikely that any will be easily visible from the north Cornwall coast.

It could be more than 10 years before any of the sites is actually generating electricity.

The Crown Estate owns the seabed and plans to offer the sites to “project development tender” in mid 2023.  The Estate hopes the windfarms will contribute towards 4 Giga-watts of renewable energy by 2035.

Seven likely bids include Corio Generation, RWE, Magnora and Hiraeth, BlueFloat Energy and Falck Renewables and EDF Renewables and DP Energy who have all announced plans to enter the auction.

None is based in Cornwall and it is far from clear how Cornwall Council’s former Wave Hub company, Celtic Sea Power, might benefit from the competitive auction.

The Crown Estate also plans to confirm seabed rights for three separate test and demonstration sites – that the Crown Estate believes could support a combined 300MW of floating wind capacity – in the Celtic Sea. 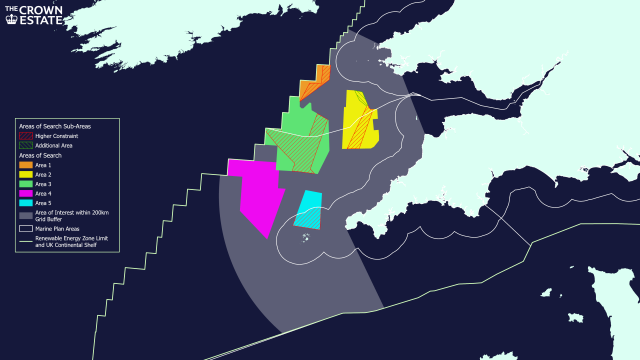 The auction regulator will now carry out environmental assessments for the sites, which are due to host projects piloting new foundation and mooring technologies.  It believes the Celtic Sea could eventually host 20GW of floating offshore wind capacity by 2045.

"These areas have been identified following technical analysis and extensive engagement between The Crown Estate, the UK and Welsh governments and key agencies, and specialist stakeholders. Further stakeholder and market feedback will be used to refine the Areas of Search into smaller project development areas, within which the first generation of commercial-scale floating wind farms could be built," the Crown Estate said.