“We’re in the money!” Penzance in line for a multi-million pound windfall, while North and East Cornwall can only wait for crumbs

Towns in Cornwall have been given details of the financial help they can expect for “regeneration.”  Penzance is the big winner – with almost everywhere north of Truro feeling like a loser.

Most of the multi-million-pound cash for Penzance is coming from central government, following considerable “technical assistance” from Cornwall Council.

Meanwhile other towns in Cornwall will have to scrap among themselves for a share of a relatively tiny Town Centre Revitalisation Fund which County Hall set up in February.  Most towns will be lucky to get £150,000.

Penzance will next week try to get another £25 million from Whitehall’s Future High Street Fund.  This will be in addition to the pre-election £25 million “Town Deals” money which the government offered to splash on each of Penzance, St Ives, Camborne and Truro – much to the anger of towns in the North and East of Cornwall.

The Cornwall Council Town Centre Revitalisation Fund is unlikely to deliver more than £150,000 per town – which one town clerk described as “peanuts.”  Towns such as Padstow, Wadebridge, Camelford, Bude, Launceston, Liskeard, Saltash, Looe and Bodmin all feel that they need much more.

“£150,000 will get us some pressure-washing of grimy buildings and a few hanging baskets,” said one town hall official.  “We could also buy more litter bins and a few tins of paint to spruce up bus shelters and public toilets.  It might look good for a month or two.  But we need serious money for jobs.  This is pathetic.”

Cornwall Council, and central government, have been studying ways to breathe new life in to town centres as retail shopping habits switch increasingly away from traditional High Streets and towards online and home-delivery.

County Hall has already given Penzance, St Ives, Camborne and Truro between £140,000 and £160,000 each simply to develop their bids for the £25 million Town Deals.  They are now setting up Town Boards charged with submitting their “Deal” bids later this year.

Part of the Cornwall Council £4million has already been allocated for those towns which have Business Improvement Districts (BIDs) in place.  The BIDs are controversial because they allow self-appointed local firms to influence public-sector investment, often competing for attention with long-standing local chambers of commerce and elected town councils.

Eight BIDs will share £556,000, including both Newham and Truro, which has again angered towns in the North and East of Cornwall who feel the creation of a separate Newham BID in 2013 simply allowed Truro to double its influence.

Other BIDs which will benefit are St Austell, Newquay, Falmouth, Camborne, St Ives – and, again, Penzance.  There are no BIDs in the North and East of Cornwall. 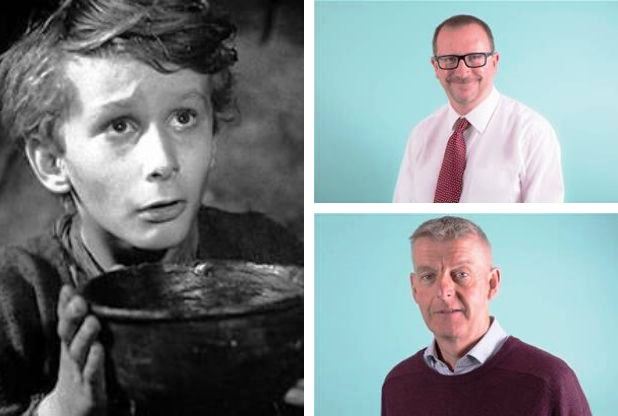 In addition, Redruth is hoping to benefit from a separate bid to Historic England to help revitalise its town centre as part of a total £3.7 million investment.

But it is the way in which towns in the North and East of Cornwall have been left to scramble for a thin slice of Cornwall Council’s Town Centre Revitalisation Fund which is angering local councillors.  Nearly 13% of the original £4million pot has already gone to the BIDs.

“We are not alone; this is a national, indeed international, trend. Our settlement pattern is made up of one small City and an unusually large number of dispersed market towns and most are facing huge change on their high streets, with traditional retail in decline as a new ‘digital industrial revolution’ changes the way people shop and spend their time.

“The changes faced on Cornwall’s high streets are not unusual in the UK, but they are exacerbated by additional economic challenges faced in Cornwall, including lower than average pay, geographical remoteness and the seasonality of tourism.

Until March the Cornwall Council cabinet portfolio holder, responsible for County Hall’s input into how these various funds are allocated, had been councillor Bob Egerton.  Cornwall Council decisions which have boosted Penzance were taken largely during his period of office.

But this cabinet post is now held by councillor Tim Dwelly, who is writing to town councils throughout Cornwall with details of what they can expect in the months ahead.  Mr Dwelly is the councillor for Penzance East.

The committee which scrutinises Mr Dwelly’s work is chaired by councillor Jim McKenna, who is the councillor for Penzance Promenade.