The tensions within Wadebridge Town Council were laid bare last night (Wednesday) after a series of extraordinary contributions criticising what the speakers claimed was a deliberate attempt to sabotage the local neighbourhood development plan.

Mayor Adrian Jones said the council was in danger of becoming “a joke” after complaining that one of his colleagues was responsible for bullying and harassment.

Cornwall councillor Steve Knightley accused town councillor Amanda Pennington of filing a series of “vexatious complaints” against him.  Former mayor and councillor Elliot Osborne had started the meeting, from the public gallery, by urging all councillors to now unite in support of the local development plan.  “The on-going campaign against the plan is detrimental to the town,” he said.

Formal public consultation about the document, which seeks to identify the likely sites for future residential development, is due to start next week.  The Wadebridge area plan has taken several years to research and produce.  It includes the neighbouring parishes of Egloshayle and St Breock.

Mr Jones said the Wadebridge Town Council had already voted to ratify the plan, which recommends against including a large site near Sladesbridge for development.  Some Wadebridge residents fear this makes it more likely that development will be within, or closer, to the town centre.  Others are concerned that the plan could encourage large-scale development to the north west of the A39 Ball roundabout, towards Bodieve.

Last night’s meeting agreed to progress the plan through formal public consultation, and voted overwhelmingly to unite behind it.  Ms Pennington did not vote in support of this proposal and declined Mr Jones’s invitation to respond to the criticism of her.

Mr Jones said: “I am fed up with all the bullying and harassment, and the distortions and misrepresentations of the plan on social media.  I am sick of it and I ask that it stops now.  This is not how a council should behave.  Wadebridge Town Council is in danger of becoming a joke.

“To disagree is one thing – that’s fine.  But to obsessively attack and undermine council colleagues is another thing and it does not accord with the standards of public life to which we should all aspire.” 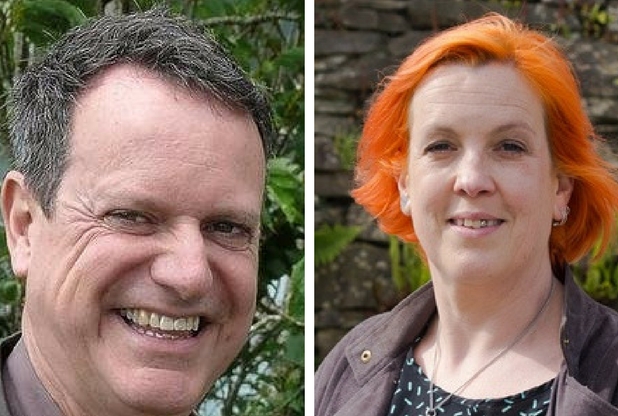 Earlier, Cornwall councillor Steve Knightley, read a personal statement complaining about Ms Pennington, who he said had waged a campaign against him for more than a year.  “I have been reported to the standards board, the police and to RIBA, the governing body for architects,” he said.

“I have attempted to ignore her and not fuel her ambitions, but these persistent attempts to damage my reputation and my ability to earn an income must be curtailed.  I would like to draw a line under these vexatious complaints, but if they continue I will be forced to take the matter further.”

Wadebridge’s other Cornwall councillor, Karen McHugh, had earlier said that the local neighbourhood development plan had taken years to write.  “It is not just about land allocation,” she said, “and it shouldn’t be overshadowed by speculative planning applications.”

Both Mr Knightley and Ms McHugh are Liberal Democrats.  Ms Pennington is a Green Party activist.

Only last week Ms Pennington called on Cornwall Council’s Liberal Democrat leader, Adam Paynter, to condemn what she described as an online bullying campaign against her, following criticism in a closed Lib Dem Facebook group.  Neither Mr Knightley nor Ms McHugh had contributed to that criticism and the Facebook group is currently suspended, pending a party investigation.