The former MPs who now want a seat on Cornwall Council

Sitting on a bench alongside Copperhouse Pool with Andrew George on a sunny March day I soon wonder whether this was the best place for a chat with the former MP as our conversation is halted every few moments as people pass by and greet him.

While it may be coming up to six years since he lost his Parliamentary seat to Conservative Derek Thomas it is clear that he made an impression on people over the 18 years that he represented St Ives.

And now he is looking to return to the political arena by standing for election to Cornwall Council, hoping to represent the people of Ludgvan, Madron, Gulval and Heamoor.

Andrew is not the only former Lib Dem MP standing in May’s elections – over in North Cornwall Dan Rogerson, who represented the area for 10 years, is standing in Launceston South.

Both found themselves out of a job in 2015 when Cornwall turned Tory blue in that year’s General Election.

While they both tried to regain their seats at the 2017 election, it was just Andrew who again attempted to take back the St Ives seat in the 2019 election.

But now they are both hoping to be taking seats in the council chamber at County Hall after May 6.

Looking out at Copperhouse Pool Andrew explains that he was asked by the Liberal Democrats about whether he would be interested in standing for the council.

“I wasn’t thinking about it before being asked,” he says “But I am Cornish born and bred, I care about the people and, until the day I die, I want to fight for the best for the people of Cornwall.

“I am not someone to walk away, I care about the things I care about and want to fight for them and Cornwall is still worth fighting for.”

Speaking to Andrew it is clear that his passion for the area burns strongly and hopes that the people of Ludgvan, Madron, Gulval and Heamoor will vote for him on 6th May.

He said: “I think that Cornwall Council is in an interesting place at the moment and if I can play a very small part in that…I have no ambitions to take a cabinet role, I have no time for that anyway.

“One of the biggest challenges that Cornwall faces at the moment is being taken for granted.

“The Tories are talking about taking over Cornwall Council and they are in pole position to be as ambitious as that, but I think that would be disastrous and another reason why I wanted to stand.

“Cornwall will have lost its identity if that happens (Conservatives take control of the council). Cornwall then becomes a plaything of government and Tory ambitions.  It will be taken for granted and used for PR purposes.”

Andrew has never been a councillor before, he was a campaigner on environmental and Cornish issues before he was selected to stand in a general election for the Lib Dems, so if elected it will be new ground for him.

He said that he had watched Cornwall Council from afar and sometimes felt frustrated that he was not taking part.

“When you realise that there is a debate going on and there is something missing that you could contribute to it – even in my own party I am a lone voice and have something different to add.

“I am not a know-all about all subjects, definitely not, but there are subjects that I am involved with and you hear them (councillors) waffling on about things they know nothing about.

“It is about truth and justice, I am not a tribalist either, I am known for telling my party what is wrong.”

However he feels that Cornwall and Cornwall Council need to be stronger in fighting for its values and for the best for the Duchy.

Turning to the housing targets imposed on Cornwall by the government, Andrew feels that the council should be taking a far greater role in determining what is best for Cornwall.  And while devolution has been welcomed he doesn’t feel that anything really substantial has been given to Cornwall yet.

“Until Cornwall can tell the government where to get off quite frankly all they are doing is the government are passing the buck. Most of the areas where pieces have been handed down, it is not sufficiently substantial for us to say that Cornwall is in control of its own affairs.

“One of the biggest arguments I have with my political colleagues at County Hall are they feel they are in political control, they are not. Although I think they are wonderful people and do a fantastic job and all the efforts they make to public service….I have often described local authorities as agents of the government rather than the effect they have.”

He highlights that while the government sets housing targets for Cornwall it is the council which then has to try and work out where those homes are built.

“Who has to decide which neighbourhood has to take a number of houses they don’t want? It is the council not the government.”

And Andrew is clear in what he thinks Cornwall Council should be doing: “What I would like to inject into the council is they should be shouting for Cornwall.  When the government doesn’t give us the powers we need we should jolly well march on London, wave our placards and slam our fists on the desk.

Above: Andrew George and below, Dan Rogerson 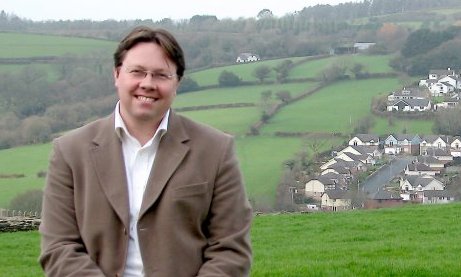 “We shouldn’t be acting like nice managers and say let’s manage what the government has given us to make it less bad.

“They should be doing some fist slamming and shouting and if I get elected that is what I will do.”

Over in North Cornwall Dan Rogerson is preparing to get out onto the campaign trail once more explaining that his decision to stand came as a result of a mix of wanting to get back into politics and a candidate for the Liberal Democrats having to stand aside.

Unlike Andrew George Dan has been a councillor before starting his political career in the late 1990s and early 2000s in Bedford.

And when he was MP for North Cornwall from 2005 to 2015 he worked closely with colleagues at Cornwall Council on various local schemes including the dualling of the A30 at Temple.

Campaigning for an election in a pandemic has been slightly different for Dan and he said that while he had not been knocking on doors until this week he had spoken to some locals.

“I didn’t think it was right to start doing that until now, I want to make sure people feel safe, but I have seen some people out and about and have talked to them, social distancing, outside.

“It has been good to see some familiar faces and I think the people have welcomed it as well – chats over garden walls and things like that to get their points of view.”

Dan believes there could be an increase in postal voting on May 6 and says that it is always significantly higher in local elections.

“I suspect we will see more people registering for postal votes, but people do like to get out and vote in person, they see it as an occasion and taking part in the democratic process.”

Dan recognises that Cornwall Council will have a heavy agenda after the May elections with having to tackle the impact of Covid-19 and Brexit as well as the ongoing housing crisis and other issues.

He said there was a need to ensure there is more affordable housing available for local people and more social rented properties to help those struggling to meet housing costs.

But he said that there was also a need to ensure that sufficient infrastructure was also being provided alongside any new homes being built.

Dan highlighted that in Launceston councillors had worked hard to ensure that a new primary school is being built, secondary school facilities are being extended and medical services are also being provided.

On social housing he said: “It has to be a significant part of the mix. My own parents started off in council housing, it gave them a chance to get a good start in life. It has become much harder to get people onto that. I do think social housing, really good quality homes, for local people and affordable rents have to be a priority.”

Dan isn’t taking anything for granted on May 6 and says: “I am not going to count my chickens, it is up to the people of Launceston South if they think I should represent them. If they do I have experience of getting things done for Cornwall.

“But a lot of being a councillor is the casework – the issues that people come to you with for help, they look to their local councillor to get that help and support.

“I have experience of doing that as an MP, it is not the sort of thing that you shout about on a leaflet, but for many people it is the most important thing. That is what I miss doing the most, helping those people who need it most.”