The curious case of the cat on the bridge, and what it tells us about the things that really matter

It can only be a matter of time before somebody tries to calculate the cost to the taxpayer of Hatty the cat.

Hatty is the tabby which appears to have spent a few days in an alcove on the Brunel Bridge, Saltash.

The RSPCA, firefighters, Network Rail and most of the country's media spent most of yesterday (Wednesday) watching Hatty’s every move.  Hatty is not the first, and will certainly not be the last, domestic pet to capture the public's attention in this way.

Firefighters had to use a long ladder to reach the alcove, but could not safely extract the animal, which seemed in no hurry to be rescued.  At one stage, Network Rail even offered to suspend train services to help facilitate a rescue.

Late last night the rescue was called off, pending a fresh attempt to be made today.  But the story had a happy ending when Hatty returned home on her own initiative.  It is not known how she got down, any more than how she got to be so high up in the first place also remains a mystery.

Hatty’s owner told reporters this morning she was surprised but thrilled when her cat returned home, apparently none the worse for her “ordeal.”

A Freedom of Information answer provided by Cornwall Council last year suggests that firefighters are called to rescue cats with depressing frequency.  Hatty is one of at least 28 cats who was the subject of a rescue attempt in the past three years.  Several of those rescues are thought to have involved trees.

The FOI answer revealed the growing numbers of hours spent rescuing domestic pets: between 2015 and the end of 2017 firefighters spent 32.5, 43.25, and then 66 hours saving domestic animals.

The animals which “needed” the most rescues were seagulls, with 55 of the wild birds having to be saved by Cornwall’s firefighters during 2017.  Fire crews also rescued 42 dogs and 26 horses.

A statement on the Cornwall Council website says: “In the event that service resources are to be utilised in a rescue, it is CFRCS Service policy that the charging and the 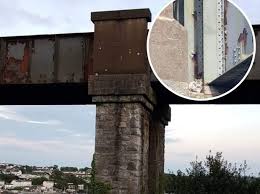 Above and below - Hatty the cat clearly has a mind of her own.   Pictures:ITVWestcountry 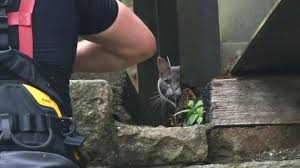 recovery of costs associated with it are made at the discretion of the Officer-in-Charge of the incident.

“If a charge is raised, it is calculated in the same way as for the provision of other non-statutory and/or non-emergency services.

“Service resources utilised in a rescue vary and are dependant on the circumstances of the particular incident. The resources involved can range from the attendance of one Officer acting in an advisory role, through to the attendance of up to three vehicles and 18 firefighters attending a major rescue; such as a horse falling down a wet and/or deep mine shaft.”