Signs of tension at County Hall, as the Liberal Democrat-Independent coalition comes under strain

Posted By theboss on 5th February 2019

The position of chairman of Cornwall Council looks set to become a make-or-break issue for County Hall’s Liberal Democrat-Independent coalition, which was already coming under strain as councillor Julian German prepares to take over from Adam Paynter as council leader.

When Liberal Democrat Mr Paynter became leader in 2017, a condition of the Independent group’s support was that Penryn councillor Mary May should be elected as chairman.  A further condition was that Independent Mr German should succeed Mr Paynter after two years – which expire in a few months.

Back in 2017 there was less clarity about the position of vice chair of the council, but Saltash Liberal Democrat Hilary Frank beat St Austell Conservative Tom French – with Independent support.

The Liberal Democrats believed that Mrs Frank would subsequently succeed to the position of chair once they had surrendered the leader’s role.  But now, apparently, all bets are off – with many Conservatives telling Cornwall Reports that they want Independent Mrs May to keep the top job.  The Conservatives are the largest group on the council and if the Independents now support their own candidate, Mrs May is secure for the remainder of her term of office.

“It’s a pretty safe bet that no-one outside of County Hall has the faintest idea of who is the vice chairman of the council,” said one Tory councillor.  “Our position is that the Lib Dems are so useless that the further away they are from power or influence the better.

“We understand that Mary is keen to stay on as chairman, and we will be supporting her.”  Cornwall Reports understands that Mrs May would be unhappy to be “relegated” to vice chair and councillors across the chamber, from all parties, believe she has done a good job so far.

A number of Liberal Democrat councillors have told Cornwall Reports that they are unhappy about staying in coalition with the Independents as the council enters its final two years before the next set of elections. 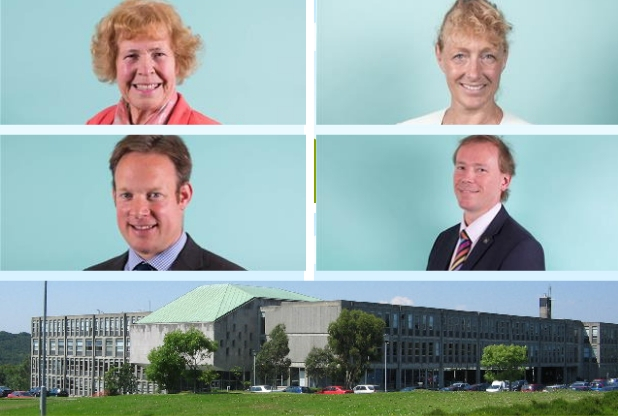 Will Independent Mary May (top left) decide to stay in the chair, and thwart her Liberal Democrat coalition partner Hilary Frank?  Who will be in Julian German's cabinet?  Will there be a role for Adam Paynter?

“We were pretty ambivalent about taking office in 2017,” said one Lib Dem, “and the brutal truth is that, politically, it hasn’t done us any good.  It’s been one cock-up after another and we’ve had to take the blame.

“There was hell-up in the (Lib Dem) group when we found out that Julian had been sent to America to go on some fancy training course.   Nobody had told us and we only found out about it from the media.  I just don’t see how it does us any good to stay in office and score own-goals, when we could be down the other end of the pitch and giving the Tories a hard time.

“It doesn’t look as if being in office gets anything done anyway.  We just agree with the officers and then have to cover-up their mistakes.”

Under the constitution, the leader of the council appoints the other nine members of the cabinet.  It is not known if Mr Paynter will simply swap with Mr German and become a defacto deputy leader, or if there will be a wider re-shuffle when Mr German reaches the top of the pole.