More beaches in Cornwall will have RNLI lifeguards patrolling from this weekend.

Cornwall Council has announced that from Saturday another six beaches in Cornwall will have lifeguards in place.

They will join the seven which already have cover – Widemouth, Gwithian, Fistral, Mawgan Porth, Polzeath, Constantine and Perranporth.

The RNLI had previously been unable to provide lifeguard cover on the beaches because it had not been able to provide staff with training and protectve equipment after the Government relaxed restrictions on allowing people to travel for exercise.

Good weather led to many people going to beaches and raised concerns that people would be at risk without lifeguards on patrol.

However the RNLI has worked with the council to provide cover on some beaches in Cornwall.

Rob Nolan, Cornwall Council cabinet member for public protection, said: “The RNLI said they were not doing any lifeguarding at the start of lockdown. We have been working with them throughout to get some cover.” 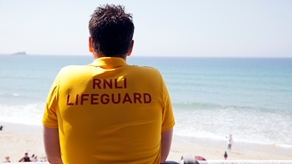 Talking about the new beaches which would have cover from this weekend Cllr Nolan said: “I wasn’t expecting that until the end of the month. They will be doing even more from June 20.”

He said he appreciated the RNLI starting patrols on beaches and helping to keep people safe.

He said: “Social distancing when pulling someone from the sea just doesn’t work. When you are pulling someone out of the sea you get as close to someone as you would marrying them.”

Clrl Nolan added: “They save around 50 lives a year – people who would have died if they hadn’t been there, so we absolutely need them on our beaches.”