Planes, trains and automobiles – Grayling says Cornwall has never had it so good

The main road through Cornwall could be fully transformed into a dual carriageway in the not too distant future.

That was the claim from Secretary of State for Transport Chris Grayling on a whistelstop visit to the county on Friday.

Mr Grayling said that the Government had provided investment in transport in Cornwall on a scale never seen before.

The transport secretary visited the new train maintenance depot at Long Rock which he formally opened.

The project is a joint scheme between the Department for Transport, Cornwall Council, Cornwall and Isles of Scilly Local Enterprise Partnership (LEP), Network Rail and GWR.

It is supporting 87 jobs and that is said to be set to increase as the depot becomes a hub for train maintenance and repairs, in particular for the sleeper service which operates between Penzance and Paddington.

Mr Grayling also paid a visit to Newquay Airport which he said could be a major beneficiary of plans to build a new runway at Heathrow.

The transport secretary has said that if it goes ahead the third runway at Heathrow 15% of slots should be for domestic flights.

He said: “If we get links from Newquay to Heathrow it will unlock a whole load of opportunities for Cornwall. It will bring more European and international tourists to Cornwall.

“The current links to Gatwick have been very successful, but Heathrow is our biggest airport.”

Newquay Airport is currently bidding to be home to the UK’s first spaceport and an announcement on whether it has been successful is expected next month.

Mr Grayling said that if Newquay got a link to Heathrow then it would help the proposed spaceport.

Stressing that he had no involvement in the spaceport decision he said: “The spaceport bid is a sign that this airport has the ability to have a diverse portfolio.”

Asked whether a Heathrow link to Newquay would affect Exeter Airport and its link to London City Mr Grayling said: “I don’t think so. We are seeing a lot of growth at regional airports.

“The city market is very different to that for Heathrow so I don’t see that there would be an impact. All our estimates show that regional airports will continue to grow.”

Commenting on the Long Rock depot Mr Grayling said it was a good example of partnership working between the government and local organisations.

He added: “We have taken a maintenance depot from London to where it will make a bigger difference, Cornwall.”

Travelling from Penzance to Newquay Mr Grayling was taken along the stretch of the A30 between Carland Cross and Chiverton Cross which is set to be dualled.

Asked whether it would be possible for the whole of the A30 in Cornwall to be dualled he said: “It is a real opportunity. With a road like this you need to do it in segments. We have done one which was completed last year and now we have this one. Then we will look at the other part.” 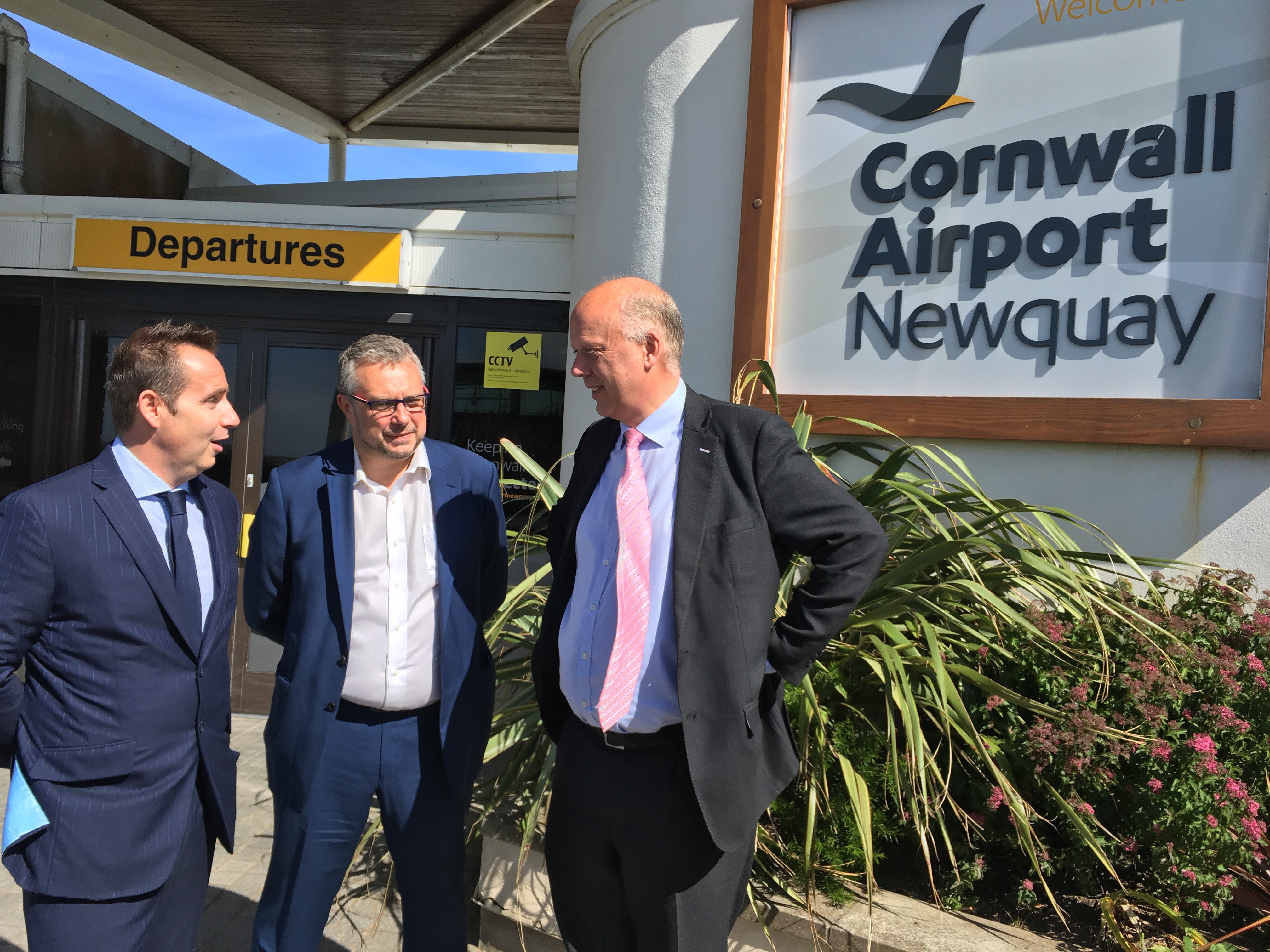 He added: “People say to me what is the government doing for Cornwall and the south west. We are developing the A303 and we are further along with that than anyone has been before.

“We have new trains on the express route. We have the extra trains to Penzance, we are doing the next section of the A30 and we have (St Austell and Newquay MP) Mr Double’s road to link the A30 (St Austell to A30 link road).

“We have the North Devon link road and the Long Rock Depot and we have people abseiling down the cliff at Dawlish for work on the railway there.

“There are things happening across the south west and investment which was not there before.”

Steve Double welcomed the Secretary of State to Newquay and said he believed a route to Heathrow could help Cornwall.

He said: “It would be a huge boost for the economy and would connect us directly with the UK’s major air hub.

“It would open opportunities for export into Heathrow and provide direct link for inbound tourists and business people.

“We are in the middle of the biggest investment in Cornwall’s transport infrastructure in its history.”

Mr Double hailed the work being done on the A30, the new St Austell link road and investment in trains as well as on buses.

He said: “We are seeing a government that, after many years of Cornwall being neglected, is investing in Cornish transport.”

Mr Double said that he was not afraid to criticise Cornwall Council but said that on transport the authority had done “a very good job”.

The MP said that he believed that a link between Heathrow and Newquay would boost the planned spaceport.

“If the spaceport does come to Newquay having a direct link to Heathrow is an added advantage.

“We then have business people from the US and Asia wanting to come to Newquay and that will be a direct link – that has got to be a good thing.”