Posted By theboss on 16th September 2020

A plan to limit the number of times that people would be able to visit the dump has been put on hold due to concerns about costs.

The postponement guarantees the issue will become a hot topic during next May’s local council elections.

The idea had been advanced by the current Liberal Democrat-Independent administration, which today signalled it was now keen to have second thoughts.

Cornwall Council’s Cabinet considered a report today looking at changes to be made to its Household Waste Recycling Centres (HWRCs) aimed at increasing the amount of rubbish being recycled.

A number of proposals had been put forward as a result of a cross-party inquiry panel which looked at the future operation of the HWRCs.

These included a plan to install automatic number plate recognition (ANPR) at the centres and limiting vehicles from visiting no more than 26 times a year.

However Rob Nolan, cabinet member responsible for waste and recycling, said that he was now deferring that proposal to be considered by the new council which will be elected next year due to the costs involved.

Cllr Nolan said that while he supported the proposals and felt that they were the right way forward he considered it would be better for any decision should be made by the next administration of the council.

Conservative councillor Olly Monk had been a critic of the plans and said it “made no sense” to limit the number of times that people could go to the HWRCs when the council was planning to have limited black bag waste collections fortnightly under the new waste collection contract which is due to start next year.

Cllr Nolan said: “There are a number of benefits of using this kind of system and we will continue to explore that. 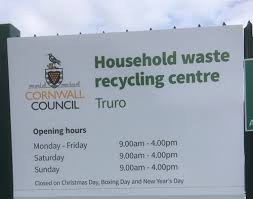 Other proposals will still be introduced as planned. These include the introduction of rigid plastics recycling,  facilities for reusing items and an extension of opening hours in the summer.

Cllr Nolan said that the trial for extending opening hours had been due to run from May to August next year but said that he wanted to move that forward so it will now take place from March to August.

In relation to rigid plastics recycling he said that this would mean that people would be able to recycle items such as garden furniture. At present he said that around 600 tonnes a year goes to the incinerator.

Plans to allow people to take items which could be reused to the HWRCs will also be rolled out to all the centres. Any reusable items would be passed to charities or community interest companies which can give them to people who need them.

A similar system is already in place at the St Austell HWRC with items collected and then given to St Blazey Recycle Reuse Resale CIC which was set up by Cornwall councillor Pauline Giles.

The cabinet voted unanimously in favour of the proposals.