Padstow’s ‘Obby ‘Oss festival will never be the same, as inquest concludes that local woman’s death was an accident

Padstow’s ‘Obby ‘Oss festival, a centuries-old tradition of dancing in the streets and heavy drinking, is to change the way it liases with authorities after an inquest into the death of a local woman three years ago.

Coroner Andrew Cox concluded his three-day investigation of how Laura Smallwood, 34, died by recording a verdict of accidental death.

Mr Cox said the event posed a risk to the public and he would write to the government advising that better organisation was necessary.  He had earlier said: “It would be terrible if May Day could not continue as these are the events that keep Cornwall Cornish.  We all want them to continue but it has to be in a way that minimises risk to everyone involved.”

Police had complained that “best practice” was not possible because no-one in Padstow – including the Town Council – would accept any responsibility for the event.

Mr Cox had said:  "Isn’t the answer for me at the end of this to write to government and say legislation as it stands does not deal with the situation where no-one comes forward as the event organiser?

"When you are getting to an event of this size with this number of people, if safety is being compromised because no-one is willing to take that on, then that should give consideration to whether these events should continue.”

Mrs Smallwood was in collision with one of the 50lb wooden “’Oss” costumes.  It was not possible to be certain, from the medical evidence, whether it was this collision alone which caused her injuries but the chaotic nature of the event appears to have been a contributory factor.

Police initially treated Mrs Smallwood's death as a potential crime, following reports of a possible assault, but eventually decided that no-one should be charged.  The Health and Safety Executive had also been notified.

The ‘Oss is made from a wooden frame covered in black oilskin with a small horse’s head featuring a snapping jaw.  A blue ‘Oss and red ‘Oss dance around the town on May Day.

In previous years the routes have been random, but in future they will be publicised in advance so that people will know where and when to expect the dancers.

One witness, Sian Howells, told the inquest that it was at the point where the two ‘Osses meet that the accident happened.

She said: “Laura had gone behind the ‘Oss.  All of a sudden the ‘Oss moved backwards. It is very unusual for it to go backwards. As it fell Laura was standing with her back to the ‘Oss.

“The one thing you are always told is not to have your back to the ‘Oss.  Most people face the ‘Oss with their hands out.  I could see it coming towards her, the rim of the ‘Oss hitting the back of her neck. She was knocked over and it looked like she fell to the ground.”

Kevin Constance, who was carrying the ‘Obby ‘Oss, said he fell backwards “on to my bum.”

The Padstow ‘Obby ‘Oss festival is often described by local people as a “spontaneous” celebration with no central organisation.  As such, police and health services have in the past found it difficult to engage with risk assessments.

The easy availability of alcohol on the day means that many of those taking part, and spectating, may suffer from impaired judgement.

Mrs Smallwood’s death has nevertheless now spurred both “’Oss committees” to co-operate with the authorities, providing more stewards and improved sharing of information.  The inquest heard that in future, stewards will make greater efforts to keep spectators clear of the wooden ‘Osses.

Attempts to treat Mrs Smallwood had been hampered when a first responder was unable to reach her because of a locked gate.  Instead a police officer alone had to administer first aid until help arrived, 25 minutes later. 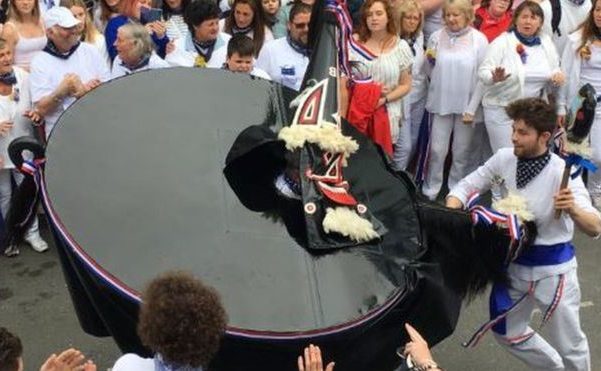 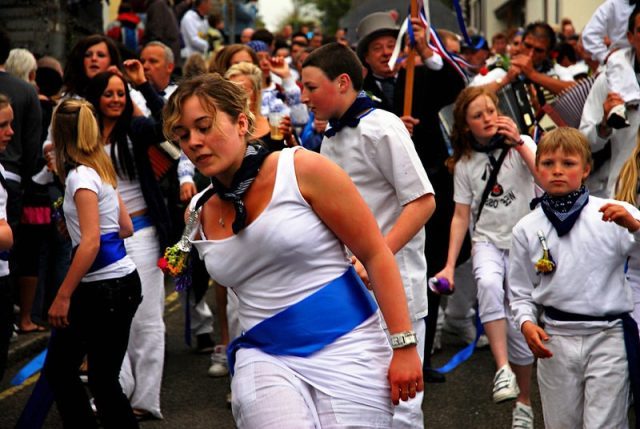 The Padstow 'Obby 'Oss festival is thought to be at least 200 years old, with its origins possibly rooted in one of the ancient fertility  rituals associated with the arrival of spring.  Today the event attracts thousands of people.

Jay Trestain, speaking on behalf of the blue ribbon ‘Obby ‘Oss read a statement expressing her sorrow and sympathy to Mrs Smallwood’s family.

“Laura was well-loved and well-known and a popular member of our community.,” she said.

“Not just as a friend but as a popular midwife.  Her passing has left a hole in our community in the most painful way and the fact that one of our own lost her life during the celebration is something we’ll never recover from.”

Ms Trestain said she has now taken the role of external liaison for both ‘Oss committees, seeking to improve communications with police and other emergency services.