Posted By theboss on 24th September 2020

People in Cornwall appear to have little chance of finding out more about how their local authorities are responding to the Covid-19 crisis, after council leader Julian German ruled out holding meetings of the Local Outbreak Management Board (LOMB) in public.

The LOMB was created in July to provide political leadership to the Local Outbreak Management Plan, which is run by public health professionals.  The LOMB’s own terms of reference say it is “public facing” and exists to "build public confidence” in the way Cornwall is responding to Covid-19.

Many other local authorities, however, do hold their LOMB meetings in public – even inviting members of the public to ask questions.

Cornwall Reports has conducted a light survey of other councils and found distinct differences in approach, depending on the political control of the council.  With growing signs that the bipartisan approach to the crisis, evident in February and March, is now breaking down, public attitudes towards Covid-19 could become a significant political issue as the parties approach next May’s local elections.

The Cornwall Reports survey is far from exhaustive, but on the face of it Labour and Liberal Democrat controlled authorities appear much more likely to conduct their LOMB meetings in secret – they use the word “private” – whereas Conservative-controlled councils appear to be more willing to invite public scrutiny.

Mr German, an Independent, told reporters yesterday (Wednesday) that “it would not be helpful” to put more information into the public domain.  “We do put a summary of our discussions on the website,” he said.  “I’m happy that we are transparent on that.”

The most recent update of Cornwall’s LOMB was on 6th August.  The board is supposed to meet once a fortnight.

Neighbouring Devon County Council, by contrast, has been holding its LOMB meetings in public since 15th July.  It is therefore possible that some people in Cornwall, particularly those in the North and East of the county, might find out more about what is happening in their area by following meetings at Devon County Council rather than their own local authority.

Devon is Tory-controlled, and was one of 11 local authorities selected by the government to help lead and share good practice across the region, as a “beacon council,” in respect to localised planning for outbreak control.

Devon’s award of “beacon” status, announced on 22nd May, was supposed to also provide for improved Covid-19 management in Cornwall, but so far there has been little evidence of any co-operation between the two councils and their diametrically opposite approach to public engagement was further reflected in the way they embraced “virtual” meetings for all other policy making and scrutiny. 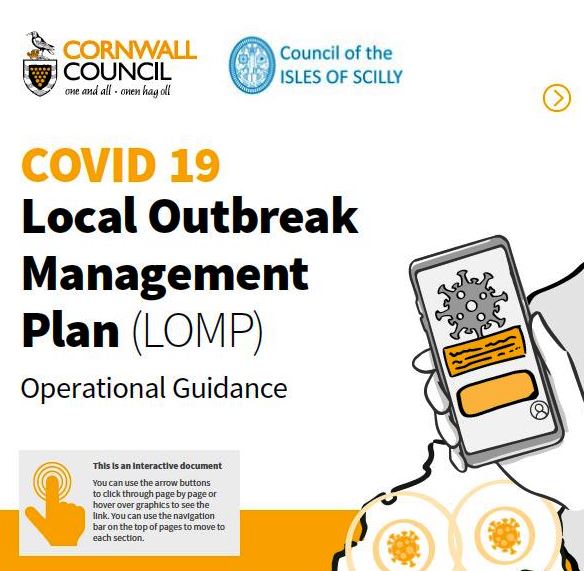 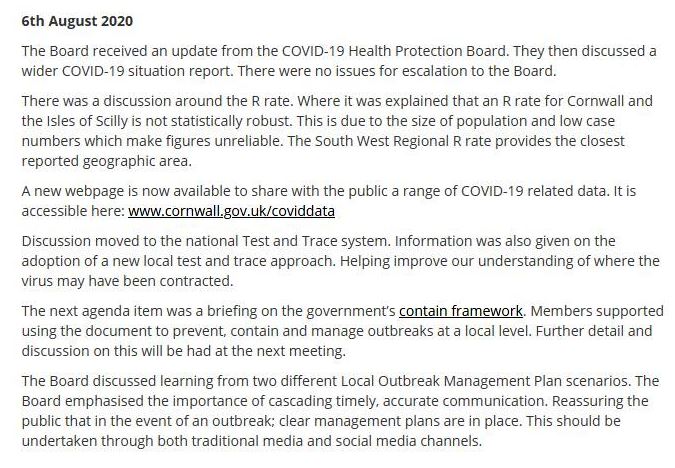 Cornwall's LOMB is supposed to meet once a fortnight, but publishes no agendas nor minutes and shies away from any public scrutiny.

Elsewhere, Tory-controlled Walsall Council also holds LOMB meetings in public.  “The purpose of the board is to provide political ownership and public-facing engagement and communications in relation to an outbreak response,” says Walsall’s website.  “Members of the public can ask the Local Outbreak Engagement Board questions which are within its remit and it will be answered when the board next meets.”

Labour-controlled Sheffield council, and Cheshire West and Chester council, both hold their LOMB meetings in secret.  Sheffield’s website says: “The fortnightly meetings of the board will be informal and in private, recognising that this is a crisis that requires swift action, free flowing discussion and agility.”

In Portsmouth, led by the Liberal Democrats, the LOMB also meets in secret but in York, where the Lib Dems rely on Green Party support, the LOMB meets in public.