Nearly a third of Cornwall councillors hold their own meeting, in defiance of County Hall’s democracy shutdown

The scheduled meeting of the full Cornwall Council did not happen yesterday (Tuesday) but more than a third of the council met anyway.

The Conservative group, the largest at County Hall, held another of what have become regular “virtual” meetings.  The Liberal Democrats, the second-largest group, have also been holding their own, separate meetings via video-links – but have been resisting calls to submit their proposals to the traditional test of debate with their political opponents.

The Tories have accused the Liberal Democrats of "behaving like a Junta" - a jibe which the Lib Dems say they found particularly offensive.

Nevertheless, the refusal of the ruling Lib Dem-Independent coalition to restore democracy has meant that several key decisions have been made without any formal public scrutiny.

These decisions include any public scrutiny of the council’s response to the Covid-19 crisis, completion of the multi-million pound Langarth land deal which will see the council build Truro New Town, and the hiring of a new team of “contract managers” to oversee the outsourcing of council services.  Calls for an independent inquiry into the council’s failure to respond to a health and safety “whistleblowing” letter from Cormac workers have also gone undebated, despite this issue triggering the resignation of a cabinet member.

Cornwall Council is now almost alone in Britain in having failed to implement government regulations introduced on 4th April permitting formal business to be carried out via video link.  All scrutiny committee meetings for the foreseeable future, including Health and Adult Social Care, have also been scrapped, and council leader Julian German has said there will be no full council meeting before July.

Yesterday's Conservative group meeting was not open to the press and public, but such participation - which is essential for a conventional council meeting - is a straightforward technological fix. 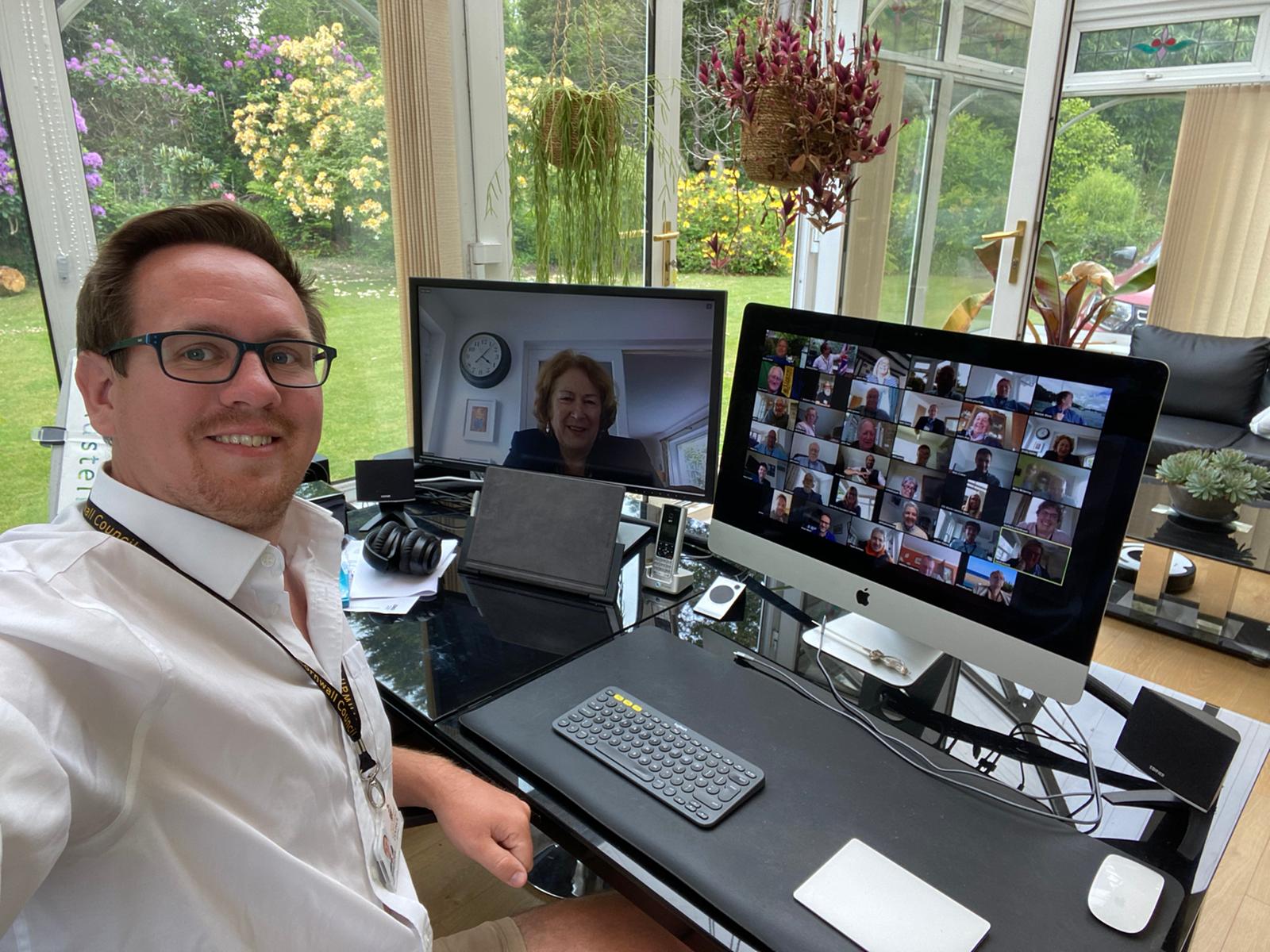 Conservative councillor Richard Pears embraces the "new normal" - this appears to the future, if Cornwall Council ever restores democracy

Conservative group leader councillor Linda Taylor said:  “It is a shame that the powers that be at Cornwall Council have cancelled yet another meeting, meaning that formal council business either gets delegated to officers or pushed back into the long grass.

“We have only now had one formal Cornwall Council meeting since lockdown started, whereas other democratic organisations, from parish and town councils in Cornwall, all the way up to Parliament have been able to hold regular meetings virtually and vote.

“It is frustrating when we see this happening but are able to meet perfectly well as a large group of councillors, and are having regular complaints from businesses in Cornwall about the time it is taking the council to sort out an application system for its discretionary payments fund, which have again already been set up quickly and efficiently by other councils elsewhere.

“This simply isn’t good enough. When will we get democracy back in Cornwall and when will the Lib Dem/Independent administration get a move on, open themselves to scrutiny from the public and other councillors and start formally meeting again?”