Learning disability and autism: a journey with leadership

My first experience of the Dimensions Learning Disability and Autism Leaders List was when I was a nominee on it. I have never considered myself a leader. I am autistic, this has an effect on my social relationships: I have never thrived as part of a team. I currently work for myself and by myself, so who…I wondered…am I leading?

I was recognised as a Leader in Advocacy Media and Policy. All of my work focuses on people with profound and multiple learning disabilities, and consequently every day of my life I advocate on their behalf. I strive for a world that is more accessible for them, a world where they are understood, a world where society recognises them as belonging. A world where we get to be together as equals.

I do this through my social media channels (do come and connect with me through Twitter, LinkedIn and Facebook http://www.thesensoryprojects.co.uk/contact) and on the platforms that I have the privilege to speak upon. For example I gave a TEDx talk with a friend of mine who has profound and multiple learning disabilities, called ‘Inclusion: For Pity’s Sake?’

Being on the list brought a lovely strangeness into my life. I am one of those people who do not tend to win prizes, I was never first across the line in a race, my poem or my artwork was never chosen for the wall. But here I was with an award, and it was strange and it was lovely.

Last year I was asked to be a judge on the Leader’s List for nominations that were made during the first year of COVID. That entailed reading the stories of so many inspiring individuals all of whom have either a learning disability or are autistic. Together with their stories I got to see videos and newspaper reports about their work. Every single one of them was a Leader, every single one of them was worthy of an award, and I was supposed to judge them!

I expect very few of the people whose stories I read considered themselves leaders, but what is clear from these awards is how leadership within society comes in many different forms. There was a young man whose bravery in singing a song in public had inspired so many people who knew him to be brave in their own lives, in their own ways. His single act of personal bravery had a ripple effect through the community around him, and although he wouldn’t have sung thinking “I will lead people into being brave” the act of him singing very much had that effect.

That effect rippled further. I watched him sing and I felt inspired, and I know that others will do the same. There were people for whom COVID posed a greater threat than it might have done for the rest of us, and in the face of that very great threat they had not thought “How will I hide?”, they had thought “How will I help?”. It was as if their greater awareness of the danger motivated them all the more to be part of the resistance to COVID. 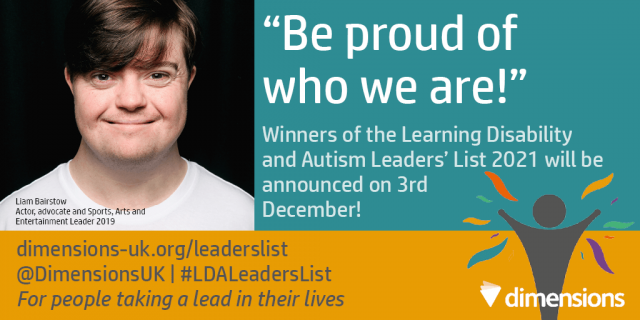 I found myself in the very strange position of trying to rank these people, trying to create a top ten! Let me tell anyone who gets nominated for the list, that being nominated itself counts almost as much as the award. I picked my Leaders out of a field of equals.

I would strongly encourage people to nominate leaders they know who have a learning disability or who are autistic for the list, bearing in mind that leadership counts in many forms. It is a wonderful way of celebrating the contribution differently abled people make to society and in recognising leadership in this way the list facilitates it having an even greater effect.

The strangeness of my journey with the list continued when I was asked to present the awards. Because of it being the year of COVID the presentation event was to be held on zoom. So I got dressed up, and sat in my dining room, with fairy lights strung behind my laptop to try and make me look as if I had been professionally lit. I entered the zoom meeting a little ahead of time so I could meet the organisers and check that the slides we were to share would work. At that point I was told my co-presenter would be BBC Radio 2’s Ken Bruce! Suddenly my fairy lights felt a little inadequate, but we had an amazing time together celebrating the Leaders. I look forward to hearing who is on the list this year when the results are announced on 3rd December!