Government gives cash to rival UK spaceports, as it becomes clear that Branson’s first commercial satellite launch is not now due until after Cornwall Council votes on £12million contribution

The government has announced more cash for a Newquay spaceport – but has awarded even larger sums to rival operations in Scotland and Wales.

The news comes as it appears that a Cornwall Council meeting scheduled for 26th November, which will be asked to vote £12 million towards the project, will be before Richard Branson’s first commercial satellite launch.

The first Virgin Orbit commercial mission is currently planned for 1st December.  But it has often previously been delayed and is in any case dependent on a payload-free test mission now due on 1st November.

The distribution of £1.3 million from the UK Space Agency further undermines the claim of Cornwall Council that its ambition to build a £20 million facility at Newquay would make it the only spaceport in Europe for horizontal-launch satellites.

The council’s cabinet portfolio holder for the Newquay spaceport project, councillor Geoff Brown, made the claim during a meeting two weeks ago but later corrected himself by conceding that Richard Branson was also developing an identical facility in Italy, again with money provided by the local government.  Mr Brown then said, correctly, that Newquay is closer to the Atlantic Ocean than Italy.  He claimed that this would therefore make it a better location.

But now the British government has raised more questions about the viability of the Cornwall spaceport by giving significantly more cash to Scotland and Wales:  The new awards are:
•    £499,811 to Snowdonia Aerospace for the Snowdonia Spaceport Development Plan, which aims to create a centre for space R&D, training and satellite launch.
•    £488,000 to Machrihanish Airbase Community Company for the spaceport cluster plan in Argyle, Scotland, centred on an aerodrome with the longest runway in Scotland.
•    £306,480 to Cornwall Council for an Accelerated Business Development and Research Project at Spaceport Cornwall, supporting its ambition to be a centre for future flight technologies.

All three projects are focussed exclusively on horizontal-launch space systems.  The UK government is also developing a vertical-launch spaceport at Sutherland in Scotland, far away from populated areas.

Science Minister Chris Skidmore told a space conference at Newport, Wales: “I’m consistently blown away by the incredible strength of the UK space industry and the contribution it makes to life across the country, providing us with innovative solutions to complex problems and creating high-skilled jobs for more than 40,000 people.

“There are huge opportunities as space becomes more commercial, and to meet them we must harness the inspirational effect space has on young people and bring even more people into this fast-growing sector.

“It’s also vital that we both build our national capability and forge new international partnerships, while strengthening our commitment to the European Space Agency, which delivers world-leading science and a significant return on investment, benefiting people and businesses across the country.”

This morning, the UK Space Agency and Australian Space Agency signalled their intent to develop a ‘SpaceBridge’ agreement, which will unlock greater collaboration between the two nation’s governments, regulators and space industries.

The government has also confirmed it will establish the UK’s first National Space Council, with further details of the chair and membership of the council to follow in the coming weeks.

Steve Double, Member of Parliament for St Austell and Newquay nevertheless welcomed the government announcement, which comes on top of £7.85 million from the UK Space Agency – which is conditional on Cornwall’s taxpayers contributing a further £12 million.  Cornwall Council is due to vote on that call for cash at a meeting in November.

Mr Double said: “Today’s announcement is great news, and comes hot on the heels of the decision by Cornwall Council’s Cabinet to back Spaceport Cornwall with funding last week.

Newquay is not the only potential spaceport developing a horizontal-launch system - above, the airstrip at Snowdonia which is  getting £499,811 from the government while below, the runway at Macrahanish is getting £488,000 for a new aerodrome.  Newquay is getting only £306,480, and is wholly dependent on Richard Branson finally getting into space. 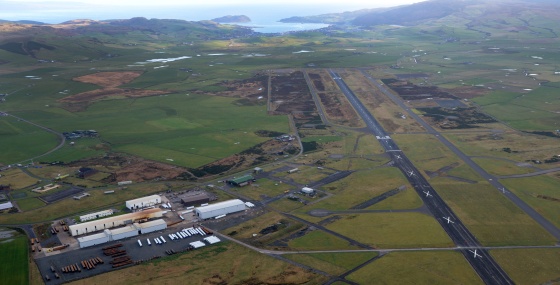 “Today’s funding goes to providing exactly the sort of high tech, well paid jobs that Spaceport Cornwall will bring to our Duchy, boosting our economy now and for future generations.”

Richard Branson has so far not launched any satellites at all, or even put a single rocket into orbit.  His oft-delayed first test flight is currently scheduled for 1st November.  That test will not include a payload.

Mr Branson’s first commercial mission, for NASA, has now been delayed until 1st December – after Cornwall Council’s meeting on 26th November.  This means that as things stand, Cornwall councillors will be asked to vote £12 million for a project which will have still not demonstrated its technology.

A rival horizontal-launch company, Northrup Grumman, which has been putting satellites into orbit since 1990, has its next commercial launch scheduled for 9th October.

Cornwall Reports has been trying to find out from Cornwall Council what information it receives from Virgin Orbit about the repeated delays to Mr Branson’s first flight.  The council replied, remarkably, saying that it was not aware of the scheduled launch dates, “so we are not aware of any failure to deliver a programmed launch.

“The first launch is programmed for later this year and that is within our expected programme. The recent "drop test" in the USA by Virgin Orbit was a success.   So our Spaceport plans remain unchanged, technology development is a risk that we need to work with our partners Virgin Orbit to mitigate.

“The cabinet report will be based entirely on factual information and evidenced through independent assessments and reports.  So we will continue with our plans to take the project to CC cabinet in September followed by consideration by Full Council in November, by which time we expect the first commercial test of the Virgin Orbit system should have occurred.”

Cornwall Reports has asked the council if it wishes to now revise this statement, following confirmation that the “first commercial test” is not now currently scheduled until 1st December.

The council added that no County Hall officials or councillors had been invited to attend the first payload-free test launch, in California, on 1st November – or indeed on any of the earlier dates which have repeatedly come and gone over the past two years.