Anti-poverty campaigners are to target the Cornwall office of Truro and Falmouth MP Cherilyn Mackrory on Wednesday.

The demonstration is one of scores seen around the country following the decision of Conservative MPs to vote against a proposal to extend free school meals to those in need during the holidays, until the end of the Covid-19 pandemic.  All six of Cornwall's MPs voted with the government, and against measures inspired by the Manchester United and England footballer Marcus Rashford.

The row shows no sign of dying down, with more votes likely to be held in Parliament as more Tory MPs say that next time they will defy Boris Johnson and rebel.

The protest comes as scores of local businesses, town councils, charities and church groups have rallied to provide free school meals during this week’s half-term holiday.  Cornwall Council is setting up a £400,000 scheme for the Christmas holidays.

The St Austell and Newquay MP, Steve Double, has already found himself banned from a café and a pub in his constituency because he insisted that parents should take responsibility for feeding their own children.

The Truro protest, organised via Facebook, appears to have been inspired by campaigners in Southend who left dozens of empty plates outside the office of another Tory MP.

The Truro event is advertised for 10am on Wednesday (28th October) at Lemon Chapel, William Street.  The organisers said: “Last week our MP Cherilyn Mackrory voted against giving children free school meals over half term.

“Taking inspiration from similar protests around the country we invite local residents to write a protest message on an empty plate & come place it outside her office. 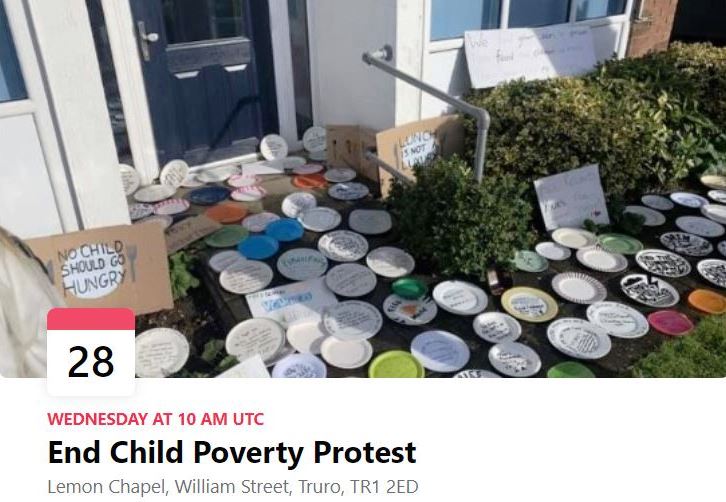 “There is growing momentum to force the government to find the £20 million required to feed children this half term.  Let's do our bit here in Truro & Falmouth to make sure Cherilyn has a change of heart.”

Last week, after the vote, Mrs Mackrory said: “I am a mum. Nothing is more important to me than the health and well-being of our children.

“I voted against the motion because the government already has significant measures in place to support vulnerable families….It is not right for schools or the education system to become part of the welfare state in the way that this motion demanded.

"The welfare state is there to protect families, the education system is there to educate our children.”