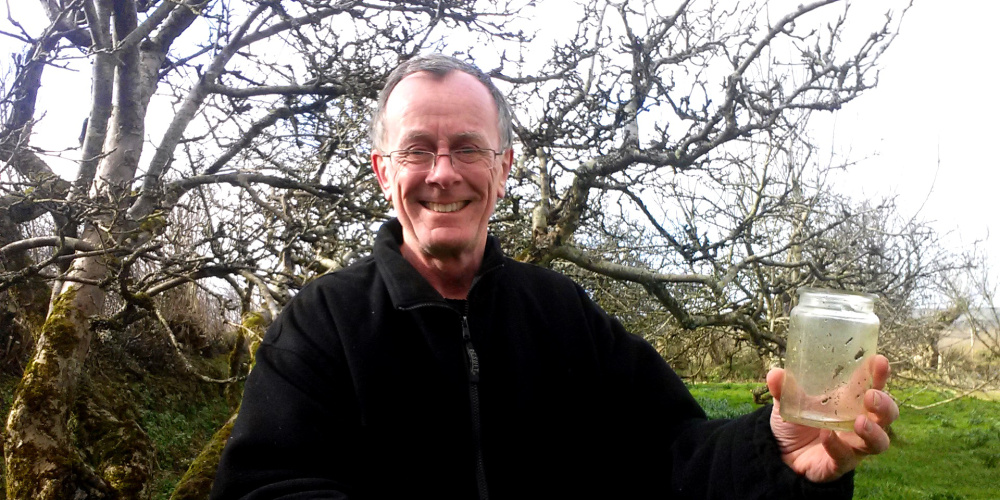 One of the many curious aspects of living in an old house is the bizarre stuff you can just find, and then ponder what secrets it holds.
Rarely can I dig the garden without turning up some fragment of blue and white china, often with ornate floral patterns. How did it get there, lurking among my seed potatoes? How long has it been there? Why have I not noticed it before?
Whenever I accidentally break a plate or tea-cup, I don’t rush outside and bury it. So what’s the story behind the crockery at the bottom of my garden?
One theory I’ve heard is simply that in the days before weekly dustbin collections, people had no choice but to take a D-I-Y approach to landfill. Another is that a previous occupant might have used the fragments in the bottom of flower pots, as a drainage aid, and then when the pot eventually got emptied the blue and white china simply got mixed in with the rest of the soil.
Even more strange are the golf balls which seem accumulate in the top meadow. I don’t play golf and I live a long way from the nearest course. As far as I know, none of my neighbours plays golf and even if they did, they would be unlikely to practice driving golf balls in my general direction.
My favourite theory for this one is that the golf balls are sometimes mistaken for eggs, and dropped by thieving magpies. I can only imagine their disappointment.
Up in the orchard, I recently discovered no fewer than 20 jam jars, apparently dumped in what had been a large patch of stinging nettles. They were mostly intact but there was no bag or box, they were just laying at the foot of the hedge.
On closer examination, some of the jars appear to have scorch-marks inside. Has someone been holding drug-fuelled raves in my orchard? Why did they not invite me? The stinging nettles had been covering this area for at least 30 years, and I’ve no idea how old the jam jars might be.
Other bits and pieces are easier to understand – odd lengths of rope, bits of twine, neatly wound but then discarded under a barbed wire fence. No doubt someone once had plans which were later forgotten.
Some things are easy to understand, and simply a reminder of how time marches on. I have a growing collection of horse shoes; evidence that someone farmed here long before tractors were invented.
I wonder what future occupants of this house will make of the stuff I will eventually leave behind. At the back of the cess pit, under the oak tree, there rusts the remains of a climbing frame which the children played on when they were small. That was 20 years ago and I’m sure it doesn’t look like a climbing frame anymore.
I am currently using a broken fork-handle to pin down a bit of netting. In years to come, it might easily be mistaken for something more totemic, like a memorial. But it’s just holding down a bit of netting, honest, and there is no deep underlying philosophical or religious significance.
Maybe one day someone might even write a column about it.