Falmouth turns out to talk about a leisure centre – but can local politicians now apply pressure to Cornwall Council’s annual meeting? Meanwhile Wadebridge contemplates a re-brand

More than 150 people packed in to Falmouth’s Princess Pavillions last night (Tuesday) to discuss how they might save the town’s leisure centre at Ships and Castles, on the Pendennis Headland.

The facility has now been closed for more than a month, leaving no public pools in Falmouth where youngsters can learn to swim.

Falmouth Town Council is seeking to have the site registered as a community asset, but Cornwall Council has warned that if the local community takes over the Ships and Castles it will get no financial support from County Hall.

Ships and Castles was built primarily as a tourist attraction, rather than a centre for organised sports, and some local people think that a new purpose-built facility would better serve their needs.  Others want to resurrect the Ships and Castles “fun pool” and claim it is adequate.

There is also wide concern that County Hall’s agenda is driven primarily by a thirst for capital receipts, with some officials keen to sell the Headland for luxury housing.

In March, as the Ships and Castles site hurtled towards its closure deadline, Falmouth's Conservative councillors vowed to fight to their last breath to keep it open.  Their moment has now arrived - but with no sign of a rebellion to over-turn the Conservative cabinet's closure decision.

Next week sees publication of the agenda for the annual meeting of Cornwall Council - a set-piece of political theatre, which provides an opportunity for Falmouth's Tory councillors to not only set out some demands, but to also seriously worry their own group leadership if they are prepared to vote for regime-change.

The annual Cornwall Council meeting will be on 24th May but so far there are no signs of the sort of cross-party confidence motion which might bring about a change in County Hall policy.  Such a motion would have to be submitted within days to be accepted for debate.

Last night’s public meeting produced no clear way forward.  The Falmouth town council is due to hold its annual meeting on Monday (16th May) with a finance committee meeting scheduled for the following week.

There are fears that the slowly-turning wheels of local government bureaucracy will not produce a solution quickly enough to prevent Ships and Castles from falling into serious disrepair - increasing the cost of bringing it back into use, if that turns out to be the preferred option.

One of the organisers of last night’s meeting said:  “It was heartening to see so many people still interested and actively engaged with what is happening with the Ships & Castles site, the headland and active leisure in Falmouth and to hear your questions, ideas and feedback.

Falmouth agrees that "something must be done" - but what?  The Ships and Castles "fun" swimming pool has now been drained of water for more than a month 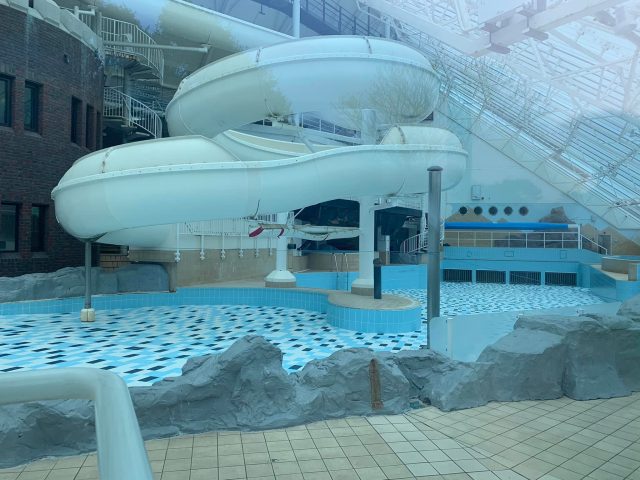 “We hope that we provided a clearer idea of where we are and how we have got here, and of the options and issues that we now all face.

“The road ahead is not clear but we feel a collective renewed energy and enthusiasm after last night’s meeting.

“We will publish some information that we shared last night and hope those who attended can share this and help to spread the word so we can continue communicating with and representing the thoughts and ideas of the community.”

Meanwhile talks are continuing between County Hall and the local community in Wadebridge, where the town’s leisure centre is still open pending a transfer of management away from Greenwich Leisure Ltd (GLL) which has been trading as “Better.”

The Friends of Wadebridge Leisure centre are asking people to suggest alternative names for the new “brand” – with most Facebook readers offering “Wadebridge Leisure Centre” as the most easily understood, instantly recognisable and least controversial.