The Labour Party can improve its electoral prospects in rural areas by embracing policies which encourage small farms, restore branch railway lines and boost local participation in housing decisions, according to a report by the Fabian Society.

The think tank, founded in 1884, has published “Labour Country – how to rebuild the connection with rural voters.”  The 32-page document has been produced in association with the Countryside Alliance.  You can download and read it here:FABJ6015-Rural-Labour-Report-180320-WEB-ilovepdf-compressed

A significant part of the research was conducted in the Truro and Falmouth constituency, where Labour came second in last year’s general election and achieved a positive swing to the party of 22.5%.  Focus group contributors to the Fabian Society report came from Probus, Malpas and Tregony.

The Fabian Society defines a rural area as somewhere with a population of less than 10,000, but then further defines this as “town and fringe” and “rural.”

Labour currently holds just 32 of the 199 constituencies designated as rural, having lost two rural seats and gained five at the 2017 general election.  Of Labour’s 75 target seats for the next election, 16 are rural and two of those are in Cornwall – the other is Camborne, Redruth & Hayle.

“In these semi-rural seats, Labour is frequently winning in the urban centre and losing the seat because of heavy losses in the rural surroundings,” says the report.

The Fabian Society is seldom seen as a home for the far-Left but its report finds much to criticise about the Labour Party’s approach to rural areas in previous generations.  “The general feeling across the focus groups was that Labour needed to think ‘outside the box, not just in cities’.  In particular, in all groups people discussed Labour losing its way under New Labour, when it ceased to be ‘about the working class’.  Rural Labour activists echoed the thoughts of our focus group participants.

“Many said that Labour doesn’t resonate with or understand rural areas, and that under New Labour it had failed to support rural areas adequately.  Labour, one rural councillor said, ‘don’t have a clue about the countryside.’  The secretary for a rural constituency Labour party, in reference to the New Labour years, described how ‘rural areas have been studiously, deliberately and consciously ignored and abandoned by the Labour party’ and the ‘plight of the rural poor is completely ignored.’

The Fabians’ report points to the recovery of the Labour Party in recent years and the collapse in support for both the Liberal Democrats and UKIP.  “Labour’s excellent performance in Cornwall shows the benefits are already being felt,” it says, pointing to how the Liberal Democrats’ support for a Conservative-led coalition in 2015 had changed fundamentally the political landscape.  But the report adds: “There is no guarantee that the Liberal Democrats’ current predicament will last indefinitely, and Labour should avoid complacency and step up its efforts to establish itself as the main opposition to the Conservatives in rural England and Wales.”

The report points to housing issues as of particular concern to rural areas.  “There was a strong and unanimous feeling in Probus that there were too many outsiders from “up country” in Cornwall,” it says.  “People with second homes and disrespectful holidaymakers were singled out for watering down Cornish distinctiveness and community. 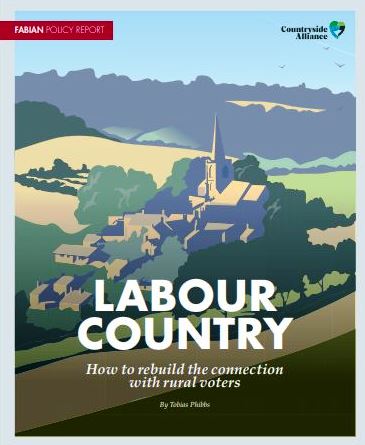 “A woman claimed that ‘second homes kill villages’; a man gave an example: ‘Down in [a nearby village] there’s about half a dozen lights on in the winter.’  Holidaymakers (and, to some extent, non-Cornish people who had moved to Cornwall) were described as ‘emmets’.

A YouGov poll conducted for the Fabians in November found that in rural England and Wales, the Conservatives lead Labour by 54% to 31%.  In urban Britain, the same poll found Labour is beating the Conservatives by 46% to 37%.

The poll added that Labour leads the Conservatives among those who voted remain in the EU referendum by 45% to 34%.

The Fabian report summarises its recommendations by calling for a place-based industrial strategy to rebalance the economy, including support for small-scale enterprise and manufacturing;  place-based investment;  and support for technical education.

The report suggests better rural transport, including the restoration of the rural bus routes lost since 2010 and the municipalisation of bus services and  reviewing the effects of the Beeching cuts to rural train services.  It also wants local, affordable and attractive housing, requiring “democratic local involvement in planning,” affordable and social housing to meet local need; small-scale development on disused plots of land; an architectural form that fits the environment.

The Fabians also want “a fairer taxation policy” and “a post-Brexit agricultural settlement” which supports the sustainability of the countryside “rebalanced towards small-scale and marginal farms as well as the provision of public goods.”