EXCLUSIVE: Cornwall councillors “bullying” their own top lawyer so that they can vote someone an extra £8,000

Some Cornwall councillors are putting pressure on their chief legal officer to convene a special meeting of the Strategic Planning Committee, so that they can elect a chairman or chairwoman who will then earn an extra £8,032.26 in allowances.

One councillor said colleagues were “bullying” Melanie O’Sullivan, a senior official and the authority’s Monitoring Officer, into convening a meeting of the committee immediately before next week’s full council meeting – for the sole purpose of electing a chair.

The once-powerful Strategic Planning Committee rarely meets, because much of its business is now dealt with by local planning committees or by officers under delegated powers.  This has prompted some councillors to complain of a lack of democracy, while other councillors say the committee should be abolished.

Ms O’Sullivan complained that convening a meeting just to elect a chair would “not be an effective use of council meetings” - but at the weekend she backed down, saying she now “understands the political will” of the committee.

Members of the Strategic Planning Committee had until last night (Sunday) to vote, by email, if they wanted an extraordinary meeting next week, simply to elect a chair.  But Ms O’Sullivan has warned that if they go ahead with the meeting, it will be “not in accordance with the overall principles of good governance,” adding that by allowing councillors to decide for themselves if they want a meeting “goes against all my professional judgment.”

“I feel really sorry for Mel,” said one councillor.  “The Lib Dems are bullying her.  They know that there is no justification for this committee.  It will be outrageous if they slip in this extra meeting, with barely a week’s notice, just so that someone can trouser some extra money.”

The former chairman of the Strategic Planning Committee was Truro Lib Dem councillor Rob Nolan, whose promotion to the council’s cabinet earlier this year bagged him an extra £18,741.92 in allowances.

Ms O’Sullivan’s letter to members of the committee says:

I have received your feedback in relation the technical briefing and the dissatisfaction with members in not being able to elect a Chair.

I need to be clear that from a Monitoring Officer perspective it is poor governance to call a meeting purely to elect a chair. This is not an effective use of council meetings, council meetings deal with formal business of the council.

Election of the chair is a procedural issue and therefore to call any committee meeting for a procedural matter is not in accordance with the overall principles of good governance. I understand Malcom reiterated our conversation and it is true, it is not unlawful to call a meeting to purely elect a chair, but this is my professional opinion and I suspect it would be the professional opinion of many Monitoring Officers. 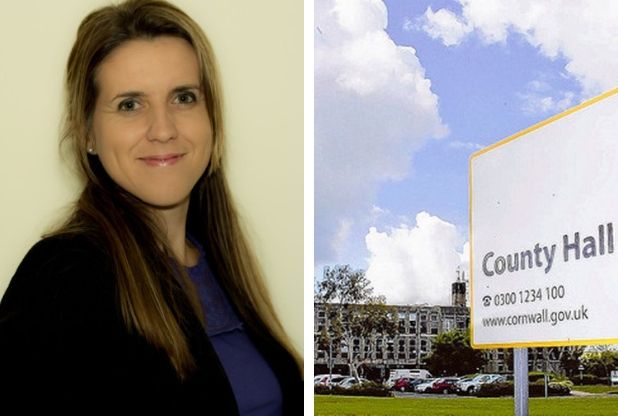 Not happy: County Hall's top lawyer Melanie O'Sullivan has told councillors they are acting "against all my professional judgement"

due to be reported at the Committee’s next meeting, which is the day after Council. Some members may recall that the committee was criticised last year in relation to the election of the chair and at that meeting we did have business on the agenda.

Members also need to be aware that at the next council meeting the independent remuneration panel will be presenting their report and recommendations and as part of that will be making a statement about the allowance for the strategic planning committee chair. It will not help that Chairman’s cause, if the committee has just held a meeting purely to elect a chair.

However, all that being said I sense the feelings in relation to this matter and although what I am about to say next goes against all my professional judgment, I of course now understand the political will of the committee. Therefore if the committee wants a meeting on the morning of council to elect the chair we can arrange it. Not that my view has changed, but if the meeting is on the day of council, then we can state that members were in for formal business.

In true democratic style I am going to ask members to vote on this (please note this is not a lawful vote, this is because in taking this action, I am only do so on the will of the committee). Therefore, if you would like a meeting to go ahead on the morning of council at 10am, please vote yes, if you don’t please vote no, using the voting buttons. If you are unable to use these just reply by e-mail.  I will confirm the outcome of the vote on Monday, anyone who has not voted by close of play Sunday, their vote will not be counted.

The alternative option is that the strategic planning committee are due to meet on 25 July and I have given you a commitment that should the information for the committee be forthcoming that I will bring the meeting date forward.

I look forward to hearing for you all.

The result of Ms O’Sullivan’s email ballot is not yet known.  If the meeting goes ahead, it will be before the 10.30am full council meeting on Tuesday 9th July.  Strategic Planning Committee meetings are usually webcast.