EU culture vultures circle as Cornwall ponders its next move

6th February 2017
By Rashleigh MacFarlane
Follow @CornwallReports
As Cornwall’s politicians continue their squabble over whether or not to gamble £536,000 of taxpayers’ money on bidding for European cultural supremacy in 2023, the city of Leeds is counting down the days to the formal launch of its own bid.

Work on the Leeds bid began in 2014.  It has already attracted nearly £400,000 from private cultural sector organisations, and is launched formally on 23rd February.  Leeds City Council, the main public sector organisation involved, is contributing a maximum of £175,000.

Before last June’s referendum decision to leave the European Union, Leeds had been the bookmakers’ favourite to win the title.  It is not known if any cities withdrew formally from the contest as a result of Brexit, but it is thought that more than a dozen had previously attended a conference in Manchester, in February 2016, in order to find out more about it.

In the end, only Leeds, Dundee and Milton Keynes proceeded.  Cardiff had been expected to enter, but decided not to.

Milton Keynes is anticipating a total spend of £150,000.  The Dundee budget is not known.  Whichever European city is ultimately successful will then be expected to invest many millions of pounds actually hosting its cultural celebrations.

William Hill is offering odds of 4-6 that Leeds wins the European crown, despite Britain’s Brexit decision. Leeds is favourite in the betting ahead of Dundee at 5-2 and Milton Keynes at 7-2. 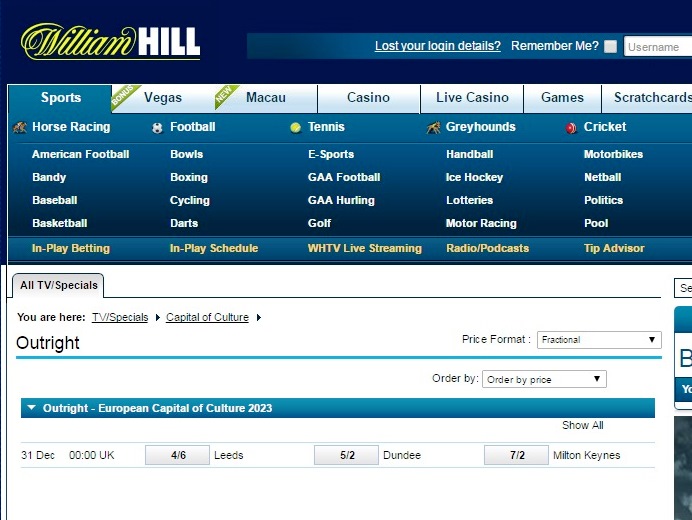 “The Leeds bid looks as though it is putting a great deal of investment behind their plan and for now they are the clear favourites to secure the 2023 European Capital of Culture title,” said William Hill spokesman Joe Crilly.

At the same time, County Hall officials are stressing that as well as the European title, to be decided in 2023, Cornwall could benefit from a UK-only cultural contest in 2021.  But the bookmakers have not yet heard of this, and do not list Truro/Cornwall as a potential entrant.

The bookies do still show Plymouth as having a 20-1 chance, even though the city has said it is not entering because it wants to focus on the 400th anniversary of the Mayflower sailing.  Plymouth had previously bid for the UK 2017 title, but lost out to Hull.  Perth is currently the 2-1 favourite, followed by Coventry at 5-2.

Cornwall Council’s scrutiny committee meets next week to decide whether or not to refer any potential bid back to the council’s cabinet, which would at the very least delay a decision on whether to enter the race.

Cornwall voted 54% in favour of leaving the EU, higher than the national average.