End of the road for Tywardreath village shop, as locals ask for their money back

The village stores at Tywardreath, near Par, have closed – less than two years after the business was “rescued” by two people who raised £470,000 from local people and promised to keep it open.

The long-term future of the shop is now uncertain.  A sign in the window says the closure is only temporary, but attempts to contact owner Trudy Thompson have been unsuccessful.  The shop closed, with empty shelves, for what many locals think was the last time at the weekend.

The way in which the store was bought from its previous owner in 2017 divided the local community, with some people unaware that the monies they handed over to Ms Thompson and her business partner Josh Taylor were personal loans.  But there was no "asset lock" on the business which remained the private property of Hunter Grange Investments Ltd, owned by Ms Thompson and Mr Taylor.  Mr Taylor has since resigned as a director.

“We thought we had bought the shop for the community,” said one.  “Now we want our money back.”

Tensions in Tywardreath came to a head last year when Ms Thompson and Mr Taylor were unable to repay the loans as they became due.  The shop is once again on the market.

Cornwall Reports has been keen to contact Ms Thompson to establish if she still stood by the statements she made in an interview last May.  In December a County Court judgement brought by an individual ordered her to repay a loan.  Further applications to the courts, for repayment of the loans, are in progress.

Local Cornwall councillor Andy Virr had hoped to broker a "Peace and Reconciliation" process but that now appears to have failed as a means to ensure the shop's survival. 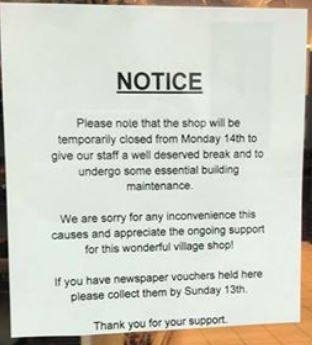