As more than 370 Cornwall Council candidates embark on their last-minute scramble for votes, one retiring Liberal Democrat councillor has raised eyebrows by urging people to support a rival.

Richard Buscombe had been the Lib Dem councillor for Padstow, but is not seeking re-election.  The official Liberal Democrat candidate for Padstow is now the former Bodmin councillor Jacqui Gammon.

But today (Wednesday) Mr Buscombe has taken to social media calling on voters to back an Independent candidate, Alec Rickard.

Mr Buscombe’s parting-shot reveals the long-simmering tensions and divisions within Cornwall’s Liberal Democrats, and seems likely to remove him from the party’s official Christmas card list.

Writing on Facebook, Mr Buscombe says: “To those of you living in the Padstow area who have a vote in tomorrow’s Cornwall Council election could I please urge you to vote for Alec Rickard .

“I have worked with Alec over many years on Padstow Town Council, Padstow United AFC, the Memorial Hall and last but certainly not least the Blue Ribbon Oss .

"Alec is deeply committed to the well being of the town and the surrounding parishes of St Merryn, St Eval , St Ervan , Little Petherick and St Issey . 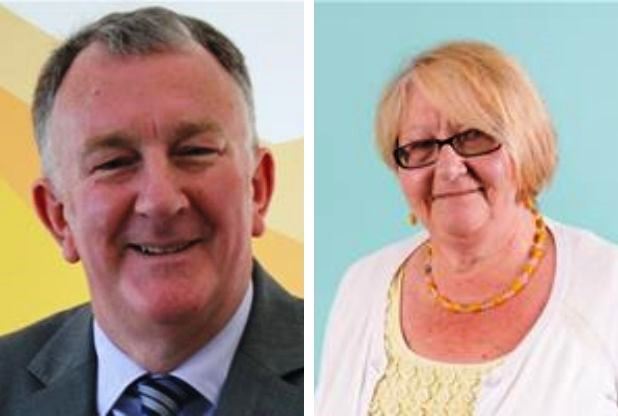 Once they were both Liberal Democrat councillors at County Hall, but now Richard Buscombe is urging voters to support an Independent - and not his party's chosen successor, Jacqui Gammon

“I have no doubt that if elected, he would be an excellent ambassador for the area.”

The full list of candidates for the new Padstow division is