Devonwall returns, as a theoretical prospect, but the Parliamentary maths remain unchanged – for now

The prospect of a “Devonwall” Parliamentary constituency has returned to the political agenda, as the Boundary Commission continues its quest to re-draw boundaries in a bid to make every MP “worth” the same number of voters.

One of the most controversial proposals involves abolishing the existing North Cornwall constituency and merging it with part of North Devon.

But the loss of the Conservatives’ majority in the June general election means the political reality is that the proposal is highly unlikely to make progress through the current Parliament, even if it survives the remaining consultation process.  A Tory victory at the next election, however, would almost certainly guarantee that the traditional Cornish-Devon border would be scrapped.

The North Cornwall constituency would be almost cut in half, with Camelford, Bude and Launceston moving into North Devon – Wadebridge, Padstow and Bodmin joining St Austell and the china clay area in a new constituency.

Many objectors, including Cornwall Council, argued that it might be better to reduce the number of MPs in Cornwall from six to five, rather than share one with Devon.  But the Commissioners have today replied: “There was support for our proposed constituencies, but also many objections to the creation of a so-called ‘Devonwall’ cross-county constituency, as detailed previously in this report.

“Many of those who objected to a cross-county constituency did not submit a counter-proposal to create five constituencies wholly within Cornwall and the Isles of Scilly, each with an electorate within the permitted electorate range. 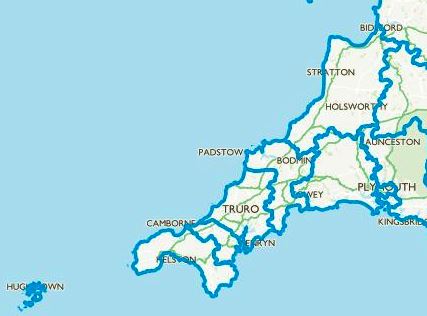 “It was argued that Cornwall was a separate entity to the rest of England and should be treated in the same way as Northern Ireland, Scotland and Wales in terms of the review.  Our assistant commissioners were sympathetic to the arguments against a cross-county constituency between Cornwall and Devon, but accepted that the statutory rules left them with no choice but to recommend such a constituency.”

The next stage is the process is the 11th December deadline for further public consultation, with the Commission due to publish its final proposals next year.  That final report would then have to undergo full scrutiny, through both Houses of Parliament, and requires legislation to be enacted.  Without a Parliamentary majority, the government would be most unlikely to succeed with such a controversial proposal – which would involve the abolition of 50 MPs.

If the Parliamentary arithmetic changes sufficiently to guarantee the proposals survive to the statute book, the Commission intends that the new borders would be in place in time for the next scheduled general election in 2022.