Police have revealed how many Covid-19 fixed penalty notices they issued in Devon and Cornwall since 1st April.

This weekend they have also clamped down at Summerleze beach, Bude, following complaints that more than two people were meeting in public.  Tomorrow the government introduces new rules allowing up to six people to meet in public.

A post on the Bude police Facebook page says: “After reports of large gatherings on the sand dunes at Summerleaze beach Bude, on Friday, and the substantial litter and mess left behind, we have taken the decision to place a dispersal order for 48 hours under section 35 of the Anti-Social Behaviour, Crime and Policing Act 2014.

“This is in place for 48 hours and will allow Officers to disperse anyone likely to cause harassment, alarm or distress by their actions or behaviour in Bude Town and Beaches. If dispersed persons return to the area within the 48 hours, they will be liable to arrest and prosecution.

“This is obviously in conjunction with the current Covid-19 legislation where no more than 2 people should be meeting in public.”

Devon and Cornwall police appear to have been one of the more enthusiastic and “pro-active” forces in their pursuit of people breaching the “unnecessary travel” rules.  It is not known how local officers might have dealt with Prime Ministerial aide Dominic Cummings if he had driven to Bude to test his eyesight.

Having “spoken to” hundreds of thousands of people who might have been defying the lockdown rules, Devon and Cornwall officers issued a total of 989 fixed penalty notices.  Only a quarter of those were to motorists from outside the Devon and Cornwall force area.

The bank holiday weekend alone saw local police issue on-the-spot fines to 50 people, but only 38% were related to “illegal” overnight stays in second homes or campervans.  At the same time the police carried out “high visibility patrols” at 900 separate locations across Devon and Cornwall.

Assistant Chief Constable Glen Mayhew said: “Over the past two months officers have spoken to hundreds of thousands of people in relation to COVID-19 regulations and a very small percentage of those interactions have resulted in fines being issued.

“Officers have used discretion in each and every situation to engage, educate and encourage before using enforcement as a last resort where necessary.

“A crucial part of this process for us has been to work closely with our communities in order to shape the approach we took and to enable us to understand the concerns and issues within our own towns and villages. 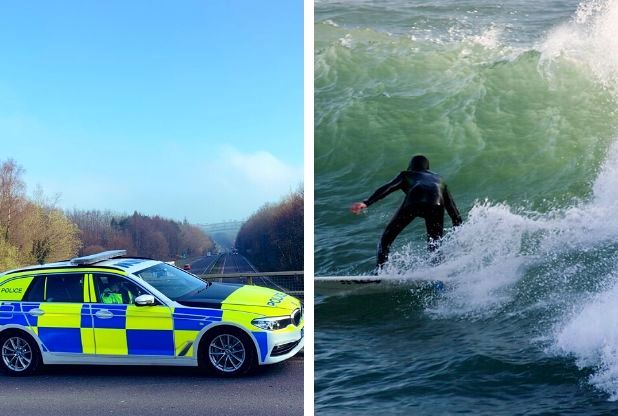 Above: Devon and Cornwall police started their lockdown campaign amid confusion over whether surfing was allowed.  Below: the aftermath of a crowd at Summerleazebeach, Bude, on Friday.  Photo:BBC 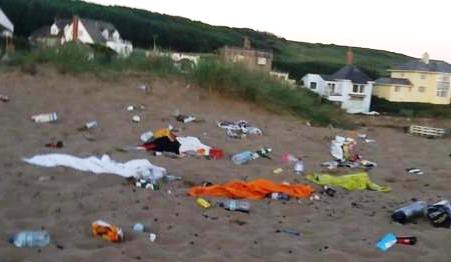 "Many of you told us that you were concerned about second homes and overnight stays so that was an area we focussed on, particularly since the changes to lockdown earlier this month.

“I would like to thank the majority of the people who continue to play their part in this national endeavour and whom I hope will continue to take personal responsibility for their actions, which remains key with the easing of lockdown restrictions.

“As we move into the next phase of lockdown, we are continuing to ask people to Think Twice about their actions - is it safe and is it fair?

-        Check what amenities might be available to you at the location you’re travelling to – will the toilets be open?

-        If you arrive and find a full car park, find an alternative and safe place to park, or come back later.

-        Be respectful of the community you are visiting – if the bins are full, take your rubbish home.

-        Check your car is in a roadworthy condition before leaving the house and take care when driving.”

"This week the government has issued new guidance which, from Monday 1 June, will allow up to six people to meet outside. Please remember that mass gatherings and overnight stays are still unlawful under COVID-19 regulations and where breaches are reported, we will respond and act accordingly."