Some 210 locals attended last night’s (Tuesday) council meeting and in a show of hands, all but four voted for their council to apply to run a post office in Taprell House.

There were cries of “shame on you’’ when the majority of councillors refused to support the project, worried about the financial risks of running a commercial enterprise.

Most of the members who voted against setting up a new post office in Lostwithiel have already indicated they will be leaving the council prior to the May local government elections.

The town has been without a post office since the end of December, forcing residents to use facilities in Bodmin, St Austell or Lerryn.

Such has been the demand for the facility to be reinstated that the largest crowd in decades – some spilling out onto the street - attended last night’s council meeting. But they were left angry and frustrated after the town council refused to take responsibility for running a post office.

Councillor Tim Hughes, who has led the initiative to provide a new post office for townspeople, urged his colleagues to support the move.

“I’ve been living and breathing this project for four months,’’ he said.

“The town clerk has put together a business plan, and we can’t lose money, at worse we’ll break even.

“I joined this council to preserve the vitality of the town and to try and achieve what residents want us to do. 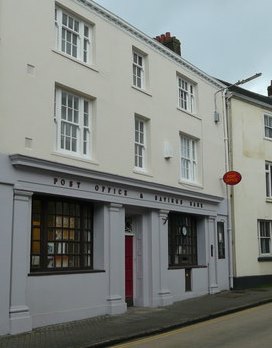 “There are 206 people here tonight who want a post office and want us to take it on. We have the support of our MP. All we need is the support of this town council – it can’t be too much to ask can it?’’

But it was, and the proposal was rejected by the majority of his fellow councillors.