Covid-19: Cornwall now supplying its own frontline, as overdue PPE delivery allows some care homes to reopen to new admissions

Cornwall’s shortage of Covid-19 Personal Protective Equipment (PPE) should be eased somewhat this week as a local manufacturer steps up to meet demand.

The shortage of PPE forced several care homes to close their doors to new admissions.  Because the equipment is in such short supply, with huge demand all over the country, there are fears that Cornwall’s position at the end of the government’s distribution line risks losing out.

There was anger last week when an overdue delivery finally arrived – but with only a third of the promised order.

Now a not-for-profit initiative has seen the “CoVisor” progress from an idea in Falmouth to large-scale production in Wadebridge.  The protective face masks are now being eagerly snapped up by GP practices, care homes, the Royal Cornwall Hospital at Truro and Cornwall Council.

The idea started with Sam Lanyon and Shawn Brown, engineers at Falmouth’s Concept Shed, who responded to County Hall’s call to use 3D printers to make PPE.  But the process was slow, turning out only four or five shields per day.

Teaming up with Francis Dufort of Dufort Associates the shields are now manufactured in a specialist aluminium injection-mould.  The small factory unit in Wadebridge has already produced thousands of protective face shields, to the highest standard and meeting all NHS regulations.

The CoVisor has already been distributed to local GP surgeries, the critical care unit at the Royal Cornwall hospital, the hospital's maternity unit, and to local undertakers.

Now, in a bid to meet demand and cover the cost of raw materials, the team has set up a Crowdfunding campaign – hitting their initial £7,500 target in only 36 hours.  This week the initiative hopes to produce 2,000 CoVisors per day.

“We want to first satisfy demand in Cornwall,” said Mr Dufort, “but we could also be looking for collaborators to set up similar operations elsewhere in the UK, and internationally.” 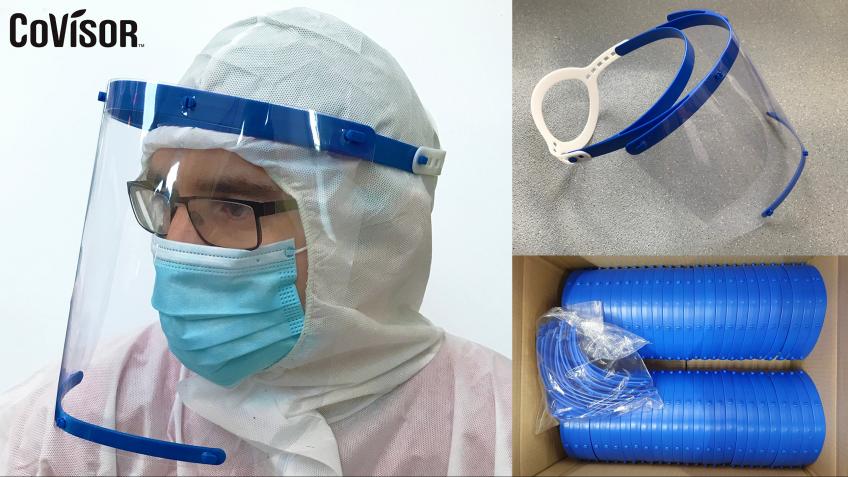 Meanwhile Cornwall Care, one of the largest care home providers, is re-opening its doors to new admissions following a delivery of PPE.  First supplies were received through the police-led Devon and Cornwall Local Resilience Forum on Friday.

Chief executive Anne Thomas posted on social media: “I'm delighted to report that the Local Resilience Forum is delivering personal protective equipment to social care providers in Cornwall - enabling them to look after everyone who needs care and support at this very difficult time.

“Our homes received their first supplies yesterday and I am now confident we have sufficient PPE to protect our staff and residents. Following this very welcome development, the Cornwall Care board has decided to re-open its doors to admissions.”

Last week Cornwall Council complained “in the strongest possible terms” that the government’s distribution system had left Cornwall with only one third of the PPE it needed.

Health Secretary Matt Hancock has now promised that supplies will be made daily – but has also warned that PPE “is a scarce resource which must be used wisely.”  His implication that doctors, nurses, care workers and ancillary staff had somehow been wasting their PPE has drawn wide criticism.

Meanwhile the “Dunkirk spirit” of small, local initiatives continues to contribute, particularly through the use of 3D printers.  A Falmouth Town Council-backed operation, based at Falmouth School, is co-ordinating more than 40 3D print enthusiasts who between them have made more than 1,000 face shields.