Posted By theboss on 11th September 2019

The stage is set for Cornwall Council’s ruling cabinet to debate, for the first time, its policy towards a proposed Newquay spaceport when its 10 members meet next week.  The cabinet is being urged to contribute £12 million towards the £20 million construction costs, even though Richard Branson has yet to demonstrate that his rocket is capable of reaching orbit.  Central government is providing £8 million.

The repeated delay of Virgin’s LauncherOne system over the past two years had led to speculation that Cornwall Council would postpone a decision until after a successful test flight, now due to take place over California on 1st October.  But officials are pushing for a firm political commitment to increase the council’s capital budget at the cabinet meeting next Wednesday, 18th September.

Critics of the spaceport project fear that Cornwall is repeating the mistakes of local authorities in the USA, who spent $250 million over nearly 25 years and who are still waiting for Mr Branson to reach space.  “Spaceport America” was the world’s first, and remains a controversial “white elephant” in the eyes of New Mexico taxpayers.

Climate change campaigners fear that building and operating a spaceport is directly contrary to Cornwall’s ambitions to become carbon-neutral by 2030.  Some have threatened to withhold council tax if County Hall goes ahead with the project.

But a council-commissioned review  of published scientific literature concluded that the overall carbon emissions were “not significant” compared with other sources – although it confirmed that the spaceport would make a net addition to the more severe “black carbon” (soot) pollution which is particularly damaging when released at higher altitudes.  The council’s study also relied on engine-efficiency data provided by Mr Branson.

The council, and the Local Enterprise Partnership, have over five years published wildly differing forecasts of the numbers of jobs that might be created by a “space sector” in Cornwall.  These projected numbers have declined in recent months, and now appear to have settled on about 50 jobs in the next few years.  Initially, the number of promised jobs is only three.

The word “risk” appears no fewer than 34 times in the cabinet’s briefing paper.  The council has yet to commission an Environmental Impact Assessment.  But the document says: “The risk of not proceeding at the earliest opportunity with the proposed Phase 1 pathfinder launch of the Virgin Orbit launch system at Cornwall Airport Newquay is that momentum and market advantage are lost, and Virgin Orbit establishes its European Hub at another location, now most certainly in another country.

“Cornwall’s credibility in the global space industry would be damaged, resulting in a lower profile in the sector, and a decrease in the ability to attract other businesses.

“It would mean Cornwall and the UK misses out on the opportunity to expand a new high value economic sector, bringing well-paid jobs and investment to the region, as well as losing a real opportunity to use a live engineering project to inspire a generation of local children. 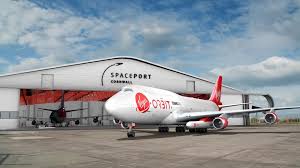 “The knock on effects to the wider economy through the establishment of a technology hub and required support services, housing and infrastructure around Newquay will be significant. Not progressing with Spaceport would hinder Cornwall Airport Newquay’s ability to capitalise on its infrastructure, fulfilling its economic potential and diversify its operations.”

Cornwall Reports is aware of at least two cabinet members who are not convinced that building a spaceport at Newquay is a good idea.  “First we were told that this was not going to involve any public money,” said one.  “I didn’t believe it at the time and now I’ve been proven right.

“The climate change issue is real.  As a council, we should be taking it seriously.  The number of jobs promised at the spaceport is really quite small.  It’s not worth the additional pollution at a time when we need to be cutting back on carbon emissions.

“But most of all, I’m really suspicious about the timing.  It just seems bonkers to bring this to cabinet for a decision now.  We’ve got Parliament shut down.  We’ve got all the uncertainties of Brexit.  This is not the time for a day in the casino.

“Let Branson prove that his technology works.  I think we all know that for all the hype, Richard Branson has never actually reached space, nor put a single satellite into orbit.

“This is cart-before-horse folly on a grand scale.”

This article has 7 comments