The future of Cornwall’s leisure centres might be decided at a one-day extraordinary meeting of a scrutiny committee, probably to be held next month.

The Customer and Support Services scrutiny committee agreed today (Tuesday) that it would investigate its officers’ proposals to close Falmouth, Launceston, Saltash and Wadebridge leisure centres, plus the St Austell hydrotherapy pool, unless alternative ways of running them can be found.

The council’s Conservative cabinet has already ruled out paying additional subsidies to the private management company, GLL, appointed by the previous Liberal Democrat-Independent administration on the basis of a “zero subsidy” approach.  The council has already paid more than £24 million to GLL since the contract started in 2017.

There will be concern that a one-day extraordinary meeting will be insufficient to answer the scores of questions thrown up by the current crisis.  For the council’s officials, however, such a meeting was probably the “least-worst” option as it keeps alive their hopes of forcing a decision at the cabinet meeting on 15th December.

Cornwall's Liberal Democrats will also be relieved that a one-day meeting is unlikely to have time to investigate the wider issues which saw the council's previous administration award a 25-year contract to GLL.

Leisure centre campaigners will certainly be calling for a more detailed investigation, including the disclosure of allegedly “commercially confidential” information necessary to make judgements about the future.  But the committee’s chairman, Conservative councillor John Keeling, said “I don’t know what that is” when asked to set up a councillor-led inquiry.

It is possible that he might end up with a formal Inquiry Panel anyway.  Such Inquiries have previously been held for High Streets, county farms and health.  These Inquiries have set their own terms of reference, called witnesses from a wide range of sources and have taken months.  Formal Inquiry Panels are described on the council’s own website and it is surprising that councillor Keeling was unaware of them.

The cabinet portfolio holder who now has responsibility for the GLL leisure contract, councillor Richard Pears, refused to 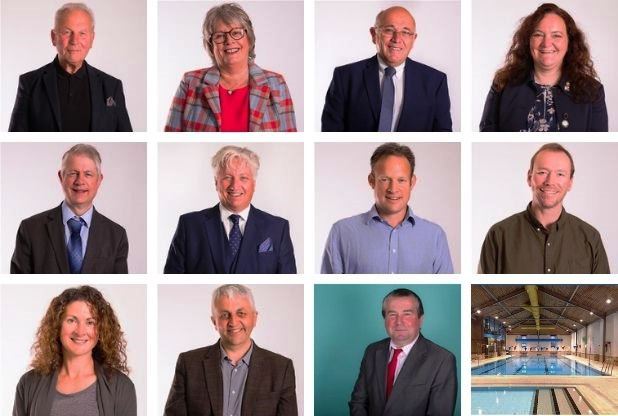 The Customers and Support Services scrutiny committee will be allowed an extraordinary one-day meeting to consider the future of the leisure centres.  Campaigners fear this will not be enough to find out what has caused the current crisis.

be drawn on any specifics when he was questioned by committee members today, claiming not to know anything about a £6.7 million capital spending uplift for leisure centres agreed at a council meeting in September.

Councillor Laurie Magowan wanted to know if this would still be paid to GLL, despite the company’s request in June to close four centres.  One key question which stems from this is why information about the GLL closures’ request, which had been received by County Hall on 8th June, was not shared with councillors before they approved the increased capital spend three months later.

The scrutiny committee is however planning to conduct an official fact-finding tour of a leisure centre.  The council has yet to decide where or when, but it is stretching credulity to think that any councillor has never seen one before.

Such fact-finding tours have a habit of attracting publicity.  In 2010, County Hall sent 12 councillors to a lap-dancing club in Plymouth to better understand its own licensing policies.