The management company which Cornwall Council has trusted to run most of its leisure centres is as the centre of a serious poisoning incident in London.

Nearly 30 people were taken to hospital after a high quantity of chlorine gas was released in an accident on Wednesday at the aquatics centre at London’s Olympic park.

The site is managed by GLL, under the trading name “Better,” which still runs most of the leisure centres owned by Cornwall Council.

Some of the injured included swimmers who were in a parent and toddler group.  About 200 people were evacuated from the centre during the incident.  At least nine construction workers on a neighbouring site were also treated at the scene.

Some of the injured are now threatening to sue GLL for compensation.

In 2016 Cornwall Council announced a 25-year deal with GLL to take over the management of its entire leisure estate.  Within weeks the company found itself in dispute with long-established community sports organisations who were upset that their regular activities would no longer continue.

In June last year GLL told County Hall it wanted to quit four leisure centres – Falmouth, Launceston, Saltash and Wadebridge.  Councillors did not find out about this until they read it in Cornwall Reports in September.

The following six months have been severely damaging to the reputations of both the council and GLL, which on Thursday is due to relinquish management of Wadebridge and Falmouth.  Wadebridge looks set to be taken over by a local community venture while the future of the Falmouth site is subject to another extraordinary cabinet meeting on Wednesday.

News of the London poisoning has fuelled concern that council officials made a major blunder when they advised Cornwall’s previous Liberal Democrat-Independent administration to enter such a long-term contract with GLL.

“Those officials certainly know how to pick a winner,” joked one councillor.

Meanwhile GLL has admitted that it still does not know the full extent of the damage caused by last week’s accident. 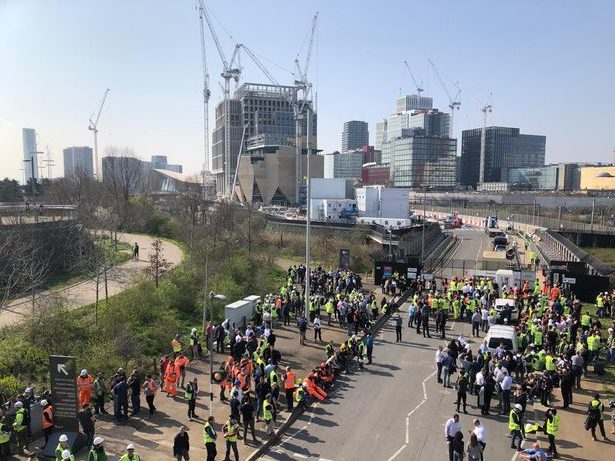 The GLL chlorine gas accident last week was a major incident, bringing dozens of ambulance crews and firefighters to the Olympic aquatics centre.  The same company still runs most of Cornwall's leisure centres.  Below: protestors made their opinions clear at County Hall

“Work at the London Aquatics Centre following Wednesday’s incident is ongoing and means the centre has remained closed,” the company said.

“We are in the process of contacting customers as it becomes possible to retrieve their personal belongings.

“We understand the concern of customers but are unable to comment on specific details of the incident until the investigation is complete and we are made aware of the full details. However, the substance released was identified as chlorine gas by the London fire brigade.

“Customers are advised to seek medical attention if their condition is of concern.”