Posted By theboss on 4th November 2021

Artists and campaigners from across Cornwall are among those making their voices heard at the COP26 climate summit in Glasgow.

The project is instigated and managed by FEAST, part of Creative Kernow, the creative and cultural sector support organisation for Cornwall and the Isles of Scilly. The charity has a mission to enrich and energise creative communities of place and practice. FEAST, the well-established arts programme, has been investing in a wide range of community cultural projects across Cornwall for the last 14 years.

The Shout LOUDER project is now treating climate delegates to images of a blood spurting boat, dead mer-people caught in fishing nets, idyllic picture postcards juxtaposed with the horror of first-hand climate change, an anthology of 26 new poems and a set of podcasts containing intriguing fly-on-the-wall type conversations between ordinary citizens in Cornwall and across Scotland.

The artists include activist, sculptor, and inventor Rob Higgs who is collaborating with visual performance artist Sophie Millar, on powerfully physical pieces that demonstrate the bloody damage that bottom trawling causes to our seas. This will be demonstrated via a sculptural Viking boat, alongside a set of mer-people, entangled in waste monofilament fishing nets, dying on the shoreline, loud and clearly shouting the message that as our seas, and its life, literally and physically die, we die alongside them.

Pupils from Mounts Bay School near Penzance are creating a dance and performance piece exploring the idea that political decisions taken now need to consider the impact on future generations. Trythall Community Primary School is creating output called ‘The Future of Bees, a series of podcasts and a short film made with primary school children exploring the vulnerability of the natural world.

Another project, “26 Voices for Change” aims to challenge and provoke discussion about the unacceptable wreckage of our planet's environmental health through the publication of an anthology at the Falmouth Book Festival.  The anthology is being distributed through bookshops in Glasgow as well as in Cornwall. Artist Chris Nixon and his sons are making a life-sized Grim Reaper to satirise a society that thinks it more important to send rockets to the stars than heal our precious planet Earth.  They are taking their performance to Glasgow.

Rose Barnecut, Director of FEAST, part of Creative Kernow said: “In June 2021 the G7 came to Cornwall.  There were high expectations, but in the eyes of many, the huge environmental questions remained unasked and unanswered - and then the G7 was gone.  Now COP26 is about to ‘roll into’ Glasgow and the world leaders will have another chance to make real, recognisable changes to counteract the existential threat to our planet of climate change.”

Rose continued: “Shout LOUDER is a project offering a second chance for Cornwall’s voice to be heard. From an open call we commissioned 12 creative projects, which have involved over 200 participants, from all over Cornwall and of all ages, ethnicities and abilities. These projects all send clear and strong messages about the urgency of the need for change, actually not by shouting but by being creative, emotional and considered. Individually the projects are powerful but we are pulling them together into a single voice so that we turn up the volume, and push the spotlight, on the world leaders, who if the G7 is anything to go by, are not really ‘getting it’ in the way that people of all ages in Cornwall most definitely are.”

Further Shout LOUDER work includes a sculptural piece made with local schools protesting about plastic pollution, making the invisible issue of microplastics visible.  Led by artist Andrew Whittle, this piece is based on the idea of monolithic circles but made from plastics recovered from local beaches. Work from Jo Willis and members of the Shallal company in Penzance will promote Doughnut Economics as a positive model for decision making within our contemporary economies and a short film made by Claire Wallerstein collaborating with Bryony Stokes will show idyllic picture postcards of Cornwall, interspersed with the stories of those who live there and have experienced climate change first-hand. 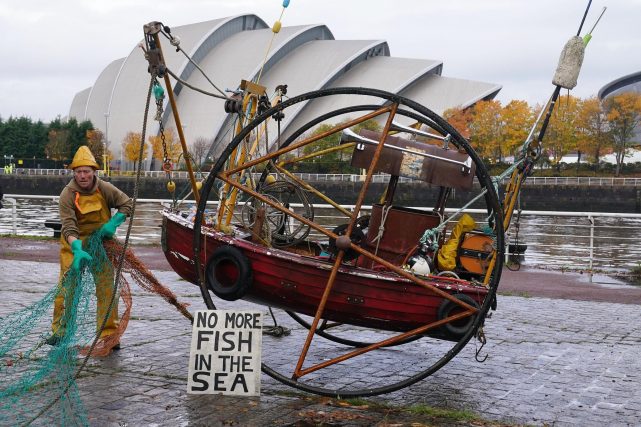 This includes some who have had their doors smashed in by waves, their houses flooded and are now being haunted by nightmares and the risk to their lives.

Celtic Conversations is a collaborative podcast project where broadcasters Becca Gregson and Leo Devine dig deep into the Cornish community to find eight diverse people whose lives and livelihoods are on the line as a result of the environmental emergency and then match them in conversation with counterparts in Scotland.

Dance artists Isobel Bloomfield and Katie Pritchard will perform a piece made to communicate the threat of rising sea levels in endangered locations around Cornwall, exploring choreographic ideas around the loss of submerged lands beneath the sea.  And in Penzance, Mary Woodvine, an actress, performer and sea swimmer has amassed a team “land swim”; an actual synchronized swim, warning of rising sea levels, but also showing the power of people acting together, because imperfect action is better than none at all.

Councillor Martyn Alvey, Cornwall Council portfolio holder for environment and climate change said: “It will be incredible to see these striking works created by our Cornish artists and school pupils demonstrating the need to tackle the climate and ecological emergencies being shown to world leaders at COP26.”

Rose Barnecut says, “Everyone involved feels the need to Shout LOUDER with these vital messages that they most want to cut right through to the world leaders and their COP26 attending delegations.  This is the creative and cultural baton that we in Cornwall are passing to Glasgow.  Given the lack of delivery and change after the G7, all of our artists are urging everyone at COP26 not to make the same error of lack of commitment to real, meaningful, actual action and change.”