Cornwall “should keep its office in Brussels until 2022,” regardless of Brexit talks

Cornwall Council should keep its Brussels office until at least 2022, the Cornwall & Isles of Scilly Leadership Board heard on Friday.

Members of the board heard a presentation from Katie Cavell, who represents the council in Brussels and liases with the various institutions of the European Union, as she outlined the various possible scenarios which might unfold in the coming days and weeks.

Matthew Thomson, who introduced the discussion, said Cornwall had maintained an office in Brussels since April 2013.  He said that in his opinion, the council should keep that office at least until the deadline for structural funds had expired, five years from now.  Britain is currently scheduled to leave the EU on 29th March.

Ms Cavell said that at the moment it was not possible to predict what might happen, as the negotiations which stemmed from the 2016 Brexit referendum had brought little clarity.  Among the directions she thought future events might drift were the possible extension of the Article 50 deadline for withdrawal, a second referendum, or even a general election leading to a change in government.

She said it was also possible that Britain might withdraw from the European Union without a deal.  That possibility appears to have been made more likely by today’s (Tuesday’s) news from Brussels, declaring that the outline of a deal – which had been expected to be published tomorrow – has now been scrapped.

The European commission is now instead expected this week to publish a new raft of “no deal” notices to alert businesses and member states on how to deal with the UK crashing out of the trading bloc. 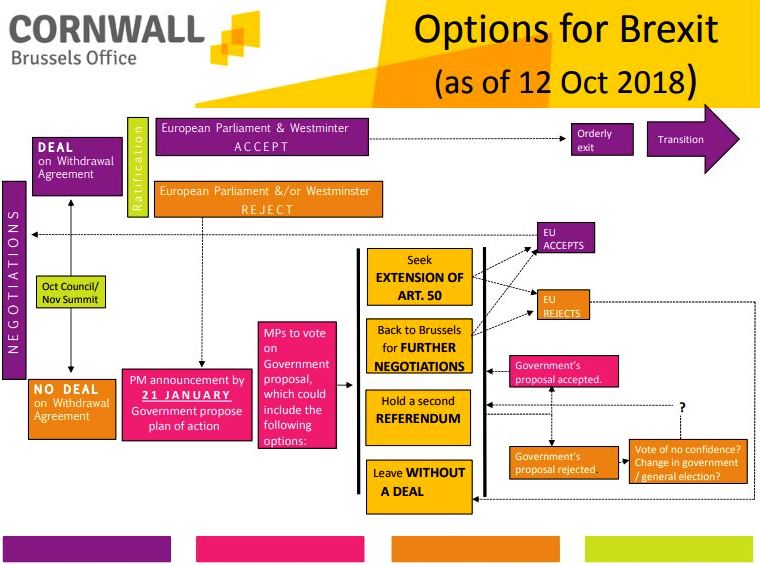 The sticking point is the Northern Ireland border issue, which now appears to be heading for yet another “extraordinary” EU summit in either November or December.  The final deadline for the UK government to announce its intentions, in order for Britain to leave the EU on 29th March, is 21st January.

The future of Cornwall’s office in Brussels has been in doubt ever since Cornwall voted by 182,665 votes to 140,540 to leave the EU.

Cornwall, like many regions in the UK, benefits from money distributed by Brussels. The European economic regeneration programme for the region—the Cornwall and Isles of Scilly Growth Programme—is worth nearly €604m.

Cornwall Council’s chief executive Kate Kennally told the Leadership Board she hoped that the UK’s position on Brexit would become clear before members held their next meeting.