Cornwall Council’s cabinet has endorsed a bid to make Truro the subject of a bid to become the European Capital of Culture.

The cabinet voted 9-1 to endorse a £536,000 pitch to the European Union – despite Cornwall as a whole voting 56% to leave the EU in last year’s referendum.

Council leader John Pollard said that a successful bid would need community support and cross-party political support.  But there are questions over whether the money should be better spent elsewhere.

The council’s ruling Liberal Democrat-Independent coalition is itself ambivalent, and cracks in the administration could widen if it appears that the issue has the potential to be divisive during May’s local council elections.

Councillor Fiona Ferguson, a leading Conservative, has already questioned if the money required for a bid represents a sensible investment.  Councillor Rob Nolan, a Liberal Democrat who is also the Mayor of Truro and his party’s prospective Parliamentary candidate for the local constituency, said he had not been consulted.   Councillor Sue James, another Liberal Democrat, said work was needed to build community support.

Proposing that Cornwall Council should embark on a bid, Independent councillor Julian German said that Cornwall had the St Ives Tate gallery, Truro’s Hall for Cornwall, the St Endellion Festival and much of its former tin mining area was now a Unesco World Heritage site.  ”We should all pull together,” he said.  “A tenacious and intelligent pursuit of this opportunity is vital.”

Seconding the proposal, Liberal Democrat councillor Jeremy Rowe said that while some people would complain that “here we go again, it’s all about Truro,” the benefits of a successful bid would reach the whole of Cornwall.  “We should retain some sense of ambition,” he said, “rather than simply manage decline.”

Councillor Bert Biscoe agreed, suggesting that Cornwall could “be in the vanguard of Britain’s new relationship” with Europe, after Brexit.

A dissenting cabinet voice came from councillor Andrew Wallis, who said the council had more important things to spend the money on.  “We always seem to find money for things like this,” he said.  “I’m not saying that heritage and tourism are not important.  But they are not the only thing – we should do more for manufacturing.”

Another cabinet member, councillor Geoff Brown, suggested an amendment to also “seek alternative sources of finance” for the bid.  Leader John Pollard said officials were already trying to find private sector finance but that ultimately the council would have to underwrite a bid.

Cornwall has been trying to win the award since at least 2008 but previous bids have always come to nothing.  Recommending another try, officials are now seeking more than £1/2 million to back the attempt.  If successful, they argue, the economic benefits represent an 8-1 return on investment.  Visit Cornwall has estimated that the award “would bring an additional 984,000 visitors to Cornwall, generating £109m additional visitor spend, supporting 2,193 additional jobs.”

The officials’ report to today’s meeting said: “The purpose of bidding for ECoC (European City of Culture) is to win the competition and deliver a year-long celebration of Cornish culture which showcases Cornwall to the world and delivers significant social and economic benefits. 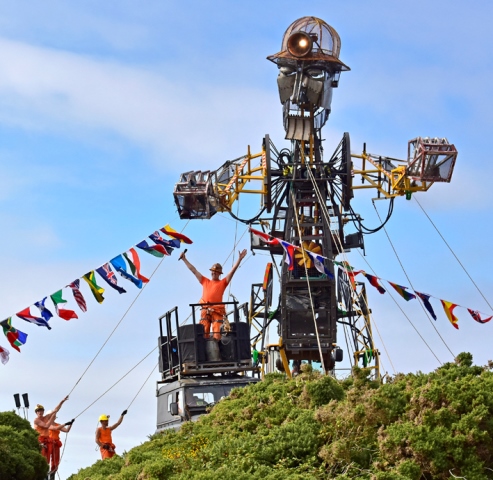 The intended outcome is to generate significant economic value for the Cornish economy. It is reasonable to assume that the economic impact of winning the competition could be circa £100m over the course of the year.

“Cornwall Council would lead the consortium of partners including Falmouth University, Visit Cornwall, Tate, the LEP, and Cornwall Museum Partnership.  However, winning the competition will not be easy and the ECoC bid should strive to deliver tangible outcomes whether the bid is successful or not. This will include a programme of creative content, marketing Cornwall and commissioning cultural work which has a significant economic and social impact.”

Officials want backing for their suggestion that full details of a bid be prepared for further discussion in October.

Considering the risks associated with any bid, the report added: “The competition to be ECoC is always highly competitive and Cabinet should be aware that a number of UK cities have already committed to bid and have been working on their applications for a considerable length of time.

“Competition is likely to come from: Leeds, Dundee and Milton Keynes. It is possible other cities will also bid.

“The Truro-Cornwall proposition will be unusual. Whilst previous awards have been given to smaller cities and their wider regions a successful award would set a new bar in terms of the scale of city capable of fronting an ECOC proposal.

“This gives us a clear USP within the UK long-listing process but provides us with the challenge of demonstrating to the EU panel that we have a credible, serious proposal that can deliver the levels of audience reach and economic impacts normally associated with larger metropolitan awards.

“However, ultimately, the bid may be unsuccessful.  The average ECOC bid takes 2 years. Cornwall will have less than 9 months from start to finish.”