Posted By theboss on 8th February 2021

The 16-year-old boy from Cornwall has been given a two-year youth rehabilitation order after becoming Britain’s youngest convicted terrorist.  The boy, who held extreme Right-wing and racist views, admitted 12 offences including downloading a bomb-making manual.

Judge Mark Dennis QC told the Old Bailey that a custodial sentence would "undo" the progress made since the boy was arrested in July 2019.

The teenager appeared at court on bail by video link from Bodmin Magistrates' Court, sitting next to his grandmother.

The case follows news that last September, Home Office data showed that right-wing extremists now make up almost a fifth of terrorists in jail, rising from 33 in 2018/19 to 45 in the year to 30 June 2020 in England and Wales.

The teenager, who cannot be named, had "significant vulnerabilities," said the judge.   These vulnerabilities had stemmed from an "abnormal childhood."

The judge said the boy had entered an "online world of wicked prejudice and violent bigotry."  He had pursued his extremist activities from his grandmother’s home.

He said that a custodial sentence caused "irreversible harm for the future" and that public safety required the boy's rehabilitation.

The boy collected far Right material and expressed racist, homophobic and anti-Semitic views on online platforms between 2018 and July 2019, the court heard.

He became the leader of the British arm of a now banned neo-Nazi terrorist organisation called Feuerkrieg Division.

The boy recruited members online such as Paul Dunleavy, a teenager from Rugby, who last year was jailed for preparing a terrorist attack. 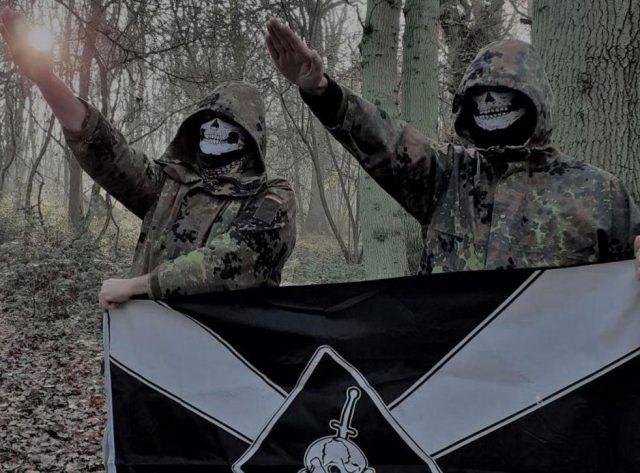 The group wanted to enact "white jihad" and the genocide of non-white people, the court heard.

The defendant first joined the neo-Nazi forum Fascist Forge in 2018, having downloaded his first bomb-making manual that year when he was 13.

He first came to the attention of police in July 2019 after detectives received information he was constructing a weapon.

When the home where he lived with his grandmother was searched, officers found a Nazi flag and a racist slogan painted on the garden shed.

Jenny Hopkins, from the Crown Prosecution Service, said after the case that people would "rightly be disturbed that a 13-year-old should hold the most appalling neo-Nazi beliefs".

The boy "claimed not to have racist views and just wanted to appear cool", she said, but the "body of evidence led to him pleading guilty to possession and dissemination of terrorist material."