Beef farmers have expressed concern about the growing popularity of badger vaccination schemes, fearing they could undermine government support for culling.

The National Beef Association (NBA) said farmers should “think very carefully” before signing up to TB vaccination projects, adding that vaccination should only be used to create cordon sanitaires in areas before the disease reaches it.

Cornwall’s Wildlife Trust is pioneering a vaccination scheme as an alternative to culling.  While scientists agree that badgers are one of several wildlife vectors which can potentially spread bovine TB, there is no scientific evidence that culling makes more than a fractional difference to the incidence in cattle.

Instead, the scientific community is calling for improved biosecurity and animal husbandry.  Farmers say this makes them feel like they are responsible for the TB in their cattle, when in fact they see themselves as victims.

The NBA’s TB committee said it feared vaccinating badgers was an expensive and time-consuming diversion.  Committee chairman Bill Harper told The Farmers Guardian that there would be no definite improvement in either badger or cattle TB levels in a high-risk area where badgers were carrying a level of disease, if a vaccination project took place.

“Even in an area with no TB, the level of cover, with just 35 per cent of the population vaccinated, would be questionable,” Mr Harper said.  “There is also the moot point of the cost of trapping and vaccinating. 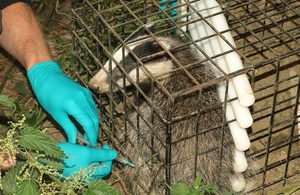 "There have been suggestions that some wildlife trusts would get involved, but there is no clear commitment over the necessary minimum four years.”

Badger trapping projects had also shown to catch only 30 to 40 per cent of the population, with 30 culling areas trapping just half of the 70 per cent badger population – and the remaining badgers dispatched by rifle.

Mr Harper also highlighted research from the Royal Agricultural University, which said the effectiveness of badger culling depended on how well it was implemented.  Called for more research and for a national conference to assess recent details and trends. The industry could then learn  “and amend the applications to get the best results.”