28th September 2016
I am constantly surprised by how often science fiction is outdone by science fact.  Up in the orchard, now that autumn is officially here, the bees appear to be slowing down.  They still buzz in and out of their hive, but I detect a sense that they are getting ready for a rest.
They appear completely oblivious to this week’s news that a foreign invader is, at this very moment, plotting their destruction.  And if we lose the bees we lose pollination of crops, with dire implications for our own food supply.  So this really matters.  The Asian hornet has finally arrived in Britain.
Northern winters are thought to be too cold for the Asian hornet, but the milder climate of Cornwall is considerably more benign.  The insects, which reached the Channel Islands earlier this year, are now thought to have reached Gloucestershire in packing crates.  While they are essentially just a big wasp, and pose no direct threat to humans, they have a nasty habit of hanging around bee hives and biting the heads off honey bees.
As Albert Einstein is reported to have said: “If the bee disappeared off the surface of the globe then man would only have four years of life left.  No more bees, no more pollination, no more plants, no more animals, no more man.” 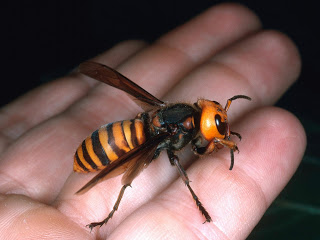 The Asian Giant Hornet. Attacks on humans in central China have claimed more than 40 lives in recent months.

I did say that this sounds like science fiction, but it really is science fact.  That is why Defra has established a three-mile surveillance zone around the site in Gloucester where just two Asian hornets were found (one of them was already dead.)  The scientists are using infrared cameras and traps to find any nests. 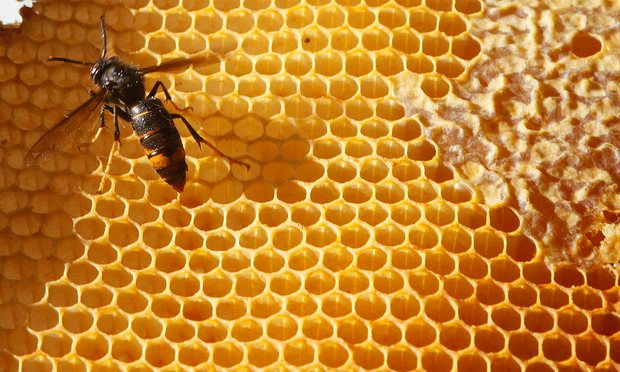 If any are found, then disposal experts will kill the hornets and destroy them.  More scientists in Yorkshire are investigating the DNA of the Gloucester insects to learn more about how they got here.
And as if all this science wasn’t scary enough, some honey bees have a natural defence to the Asian hornet: they form a mass around the hornet, sacrificing themselves, but raising its temperature to a lethal 45C.  Apparently honey bees in Britain have yet to learn this “heat-balling” technique and so their prospects for survival are not good.
On behalf of my bees, I am naturally very concerned.  But short of camping outside of their hive, armed with a can of insect repellent, I am really not sure what I can do.  Extra vigilance, I suppose.  Apparently this is what I should be looking out for:
If you think you have seen an Asian hornet, please take a picture and email it with details of where you saw it to alertnonnative@ceh.ac.uk.