The patch of oil on my garage floor is now so large I’m thinking of joining OPEC. Unfortunately the oil comes not from a deep well of latent riches, but from the blown turbo on my 15-year-old 310,000-mile Skoda.

Like many people in rural areas, I have little choice but to make my car last a long time. North Cornwall villages are lovely, but can be a gilded cage for those without independent transport.
My Skoda was for several years in harness to a one-man voluntary organisation known as DTS (Dad’s Taxi Service) and has taken its share of knocks (none of them my fault, naturally.) This particular car escaped being pressed into service when the children were learning to navigate the craters at Davidstow airfield, but one of the reasons it might now be approaching its final parking space is the state of Cornwall’s rural roads. 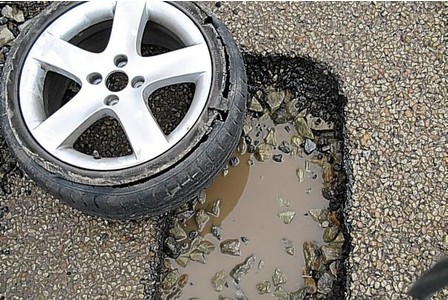 Many of the country lanes in and out of St Mabyn are like a smaller version of Davidstow’s runways – full of holes. The effect on any car’s suspension inevitably takes its toll. It appears that potholes account for a third of mechanical issues on UK roads and cost British motorists an estimated £2.8 billion every year.
The Federation of Small Businesses recently produced a report which said that potholes were one of the top three issues of concern to rural firms.
Cornwall has more than 4,500 miles of roads, many of them in country areas. The A30 (east of Chy-An-Mor roundabout, Penzance) and the A38 are trunk roads are the responsibility of the Highways Agency. All of the rest are down to Cornwall Council.
The council says it evaluates highway maintenance requirements and allocates the highway maintenance budget at the beginning of each financial year. I can only assume that St Mabyn didn’t make the list this year.
The FSB said poorly maintained roads, and a lack of regional strategic planning, posed “a significant economic barrier to economic growth,” particularly in rural areas.
The report, “Going the extra mile,” showed rural businesses were more likely to rely on roads as they often reported little or no access to public transport.
The FSB is calling for new combined authorities to commit to greater investment in local transport. Surprisingly, many of those who responded to the FSB did not know who was responsible for keeping roads in good repair.
The report certainly struck a chord with me, and I suspect with many other people. Indeed, the BBC once ran a competition inviting people to submit photos of their “favourite” pothole. The Beeb was inundated with replies.
Motoring organisations claim that at current maintenance levels, the average frequency for a road to be resurfaced in England is once every 54 years. If all councils were given the budgets they need to fix their roads (and they won’t be,) it would still them 12 years to catch up with the current backlog.
Few things wind people up as much as potholes. Only last week a Cotswold woman made national news headlines because she posted signs saying “No Roads Here, Only Holes.”
In recent years Cornwall Council has seen its annual compensation bill steadily rising – about £120,000 last year.
I know that it’s all about tax-and-spend, and priorities. Maybe there’s a case for devolving responsibility for country roads to town and parish councils. Would that make things better or worse?