A nine-day festival celebrating all things Cornish is to be held in Penzance early next year.

The Festival Kernewek - Penzance Cornish Language Festival - will be held at the town’s Acorn theatre.  It is organised by the educational charity Cornish Quest, following a successful bid to the Big Lottery 'Celebrate' Fund.

It is thought to be the first festival of its kind in Cornwall.  Similar events, celebrating Cornwall’s history and culture – with a particular emphasis on mining - have been held in Australia for many years.

Cornish Quest was established in 2008 to encourage the study of Cornish history, Cornish culture, Cornish law and Cornish language.  Its goal is to provide educational resources to people of all ages, but especially to children and young people of secondary school age.

In April the government suddenly announced it was cutting its £150,000 a year support for the Cornish language, angering Cornwall Council and tourism interests.  Opposition leader Jeremy Corbyn has promised to restore the funding. 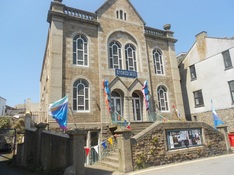 The Acorn Theatre, host to next year's festival

An online petition calling for the government to support Cornish attracted more than 10,000 names.

As the petition deadline passed in October, support reached a total of 10,342 – just clearing the target of 10,000 required to force a ministerial response.

The government website which hosted the online petition includes a map allowing users to identify, by Parliamentary constituency, which parts of the country support it, and which do not. It suggests significantly more backing for the Cornish language the further west one travels.

The petition also received backing from parts of Wales, although many constituencies in England – notably in the north – recorded no support at all.