Cornwall is leading the way in a local media revolution, designed to challenge the grip of national and multi-national organisations with a completely different approach to the news.

Readers will instead be asked to subscribe.  An annual membership works out at only 8 pence per day – compared with 70 pence per day for the Trinity Mirror daily newspaper The Western Morning News.  The Cornwall Reports site will be updated several times throughout the day.

Backed by a £3,000 Crowdfunding appeal to cover launch costs, Cornwall Reports is seeking to exploit a gap in the market created by Trinity’s closure of its Cornish Guardian, West Briton and Cornishman local news websites.  Trinity replaced these sites with its controversial CornwallLive product, in which “digital content” has largely replaced local news.

Graham Smith, 61, began his career on the Cambridge Evening News in 1976 and later had a long career in regional television.  He has been based in Cornwall since 1980.  He had been a Cornish Guardian reporter since 2014 but was unhappy at the new editorial policies introduced to CornwallLive.  This week Trinity Mirror sacked him for "failing to share the company's aims and values." 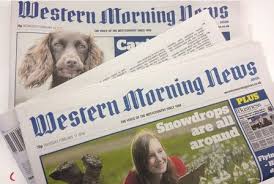 Cornwall Reports will be a not-for-profit social enterprise, owned by its readers,” he said.  “New technology allows journalists to connect directly with readers.  If the readers don’t want it, the project will fail.  But all the signs are that there is a very strong demand for local news, and that Trinity’s new approach has created a significant gap in the market.”

The National Union of Journalists last week called on the Competitions and Markets Authority to investigate Trinity’s closure of local newspapers.  Trinity bought most of Cornwall’s local titles as part of a £220million nationwide deal late last year.  Many of the journalists formerly employed on the Cornish newspapers subsequently left the company.

More than 80% of Britain’s local newspapers are owned by only five companies.  The Media Reform Coalition is now lobbying Parliament for legislation to ensure the survival of quality local journalism.  The Cornwall Reports website is the first of what aims to become a new way of supplying local news, funded only by its readers.  The site is currently free but will go behind a paywall on 1st February.